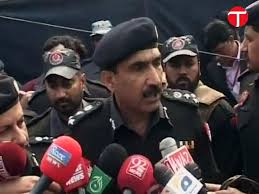 LAHORE (92 News) - Police have registered a case of the suicide attack outside Qila Gujjar Singh Police Lines against three terrorists, including a suicide bomber. The case has been registered under sections 302 and 324 of Pakistan Penal Code, ¾ of Explosive Act and 7 of Anti-Terrorism Act (ATA) against the bomber and his fleeing two accomplices. Five people were killed and 27 others were injured in the attack.