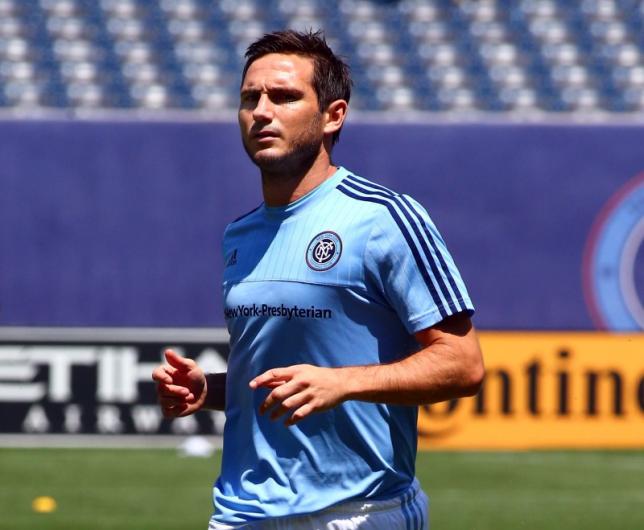 LONDON - Former Chelsea and England midfielder Frank Lampard had an unhappy Major League Soccer debut on Saturday when his new club New York City FC were beaten 3-2 by the Montreal Impact. The 37-year-old received a rousing ovation from the Yankee Stadium crowd when he came on as a substitute in the 69th minute, with New York FC already 2-1 behind. Montreal went further ahead when Ignacio Piatti scored from the penalty spot in the 84th minute, his second goal of the game, before New York FC managed a consolation through Thomas McNamara one minute later. It was a satisfying away win for the Impact over a New York team that also included Spaniard David Villa and Italian Andrea Pirlo. More than a year has passed since New York City, a new team in their first MLS season announced they had signed Lampard, who spent 13 years with Chelsea. Lampard however played for English Premier League team Manchester City, who are majority owners of the New York side, for the 2014-15 season, before joining the MLS though his debut was further delayed by a calf injury. Montreal are sixth in the Eastern Conference on 27 points, three ahead of New York City, who have played three more games. On a day of high scoring, DC United increased their lead atop the East to nine points with a 6-4 home win over Real Salt Lake. The 10-goal total was just one shy of the MLS record. Salt Lake went 2-0 up early, before Chris Rolfe scored a neatly-taken goal for DC just before the break and added a penalty in the 54th-minute to level the scores. Defender Taylor Kemp put United ahead with a 20-yard rocket in the 59th minute. Salt Lake's Aaron Maund then equalised at 3-3 before Fabian Espindola gave DC the lead again. Abdoulie Mansally tied the score at 4-4 five minutes later before Perry Kitchen and Nick DeLeon clinched the three points for DC in a second half that produced seven goals. Goals were also plentiful in Florida, where Orlando City beat the Columbus Crew 5-2 behind a brace by striker Cyle Larin, who increased his season total to 11. The Los Angeles Galaxy posted their first away win in almost a year, beating the Colorado Rapids 3-1, with Ireland striker Robbie Keane scoring the final goal deep in stoppage time. New York Red Bulls also had a 3-1 away win over Philadelphia Union, while New England Revolution triumphed by the same score at home to Toronto FC. Vancouver Whitecaps made the short trip across the border to beat rival Seattle Sounders 3-0 and remain top of the Western Conference on 39 points, ahead of Dallas (38) and Los Angeles (37). Sporting Kansas City and Houston Dynamo drew 1-1. - Reuters