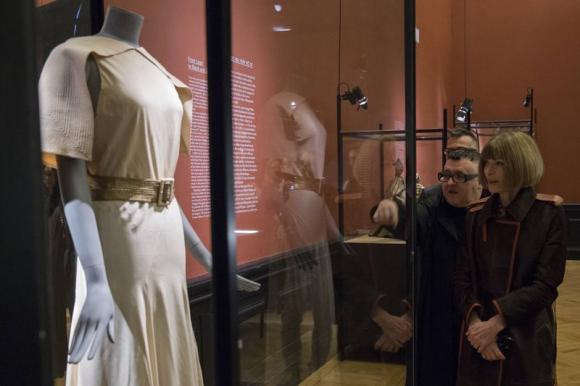 PARIS - Paris fashion week was a Lanvin love-fest this season as designer Alber Elbaz showcased a tassel-laden collection inspired by Morocco and kicked off a retrospective of France's oldest surviving couture house. Lanvin's Winter 2015 ready-to-wear show, which drew a newly blond Kim Kardashian to the front row on Thursday night, was a study in refined chic despite the liberal use of decadent velvets and satins and its pervasive Bohemian spirit. A cropped navy jacket paired with shiny black boots and trousers sporting a thick red side-stripe cut a dashing line worthy of any Hussar, while the North African influence emerged with black tassels and fringe on blanketlike yet supremely feminine skirts, dresses and coats. So strong was the collection that even the frenzied side-show of Kardashian and rapper husband Kanye West arriving a half hour late did not detract. Also sporting platinum locks was actor Jared Leto, who added mirrored sunglasses and a pair of duck boots to the look for good measure. In an overdue homage to the house's founder who died in 1946, the Palais Galliera fashion museum presents through August a retrospective of the work of Jeanne Lanvin, from golden pearl-encrusted turbans to airy silk dresses in shades of absinthe or sea-foam thickly embroidered with glittering crystals. Elbaz was on hand on Friday to show off some of the 90 pieces on display, many featuring Art Deco geometric motifs and intricate embroidery and beading. Some fabrics are so delicate they cannot be steamed to remove wrinkles, he said. "When you see the collection, there is such a modernity," Elbaz, a claret-hued velvet scarf draped over his shoulders, told journalists. "I opened up boxes from 100 years ago. I saw the care with which they were made, how long they took ... it's a mirror to the past." Raf Simons at Dior, meanwhile, took inspiration from the 1970s for a collection of abstracted animal patterns in odd pairings of sky blue and caramel, fuchsia and maroon or orange and turquoise that the designer said came from "a new species." That likely gave no comfort to the foxes sewn together into ungainly dresses that recalled Wilma's wardrobe in the Stone Age television cartoon series "The Flintstones". On safer ground were his structured wool suits with cropped pants worn with ankle boots or the long fitted wool coats in electric green and mustard yellow. - (Reuters)