KARACHI (92 News) – The doctors have on Monday decided to discharge Muhammad Ahmed, the teenage student who was allegedly brutally tortured by a teacher in Cadet College Larkana from hospital on March 17. As per details, Muhammad Ahmed will stay at a local hotel in US with his father. The doctors will continue Muhammad Ahmed’s medical check up. The teenage student chanted “Pakistan Zindabad”. Ahmed also wrote the name of Sindh Chief Minister Syed Murad Ali Shah and said that he is his hero. 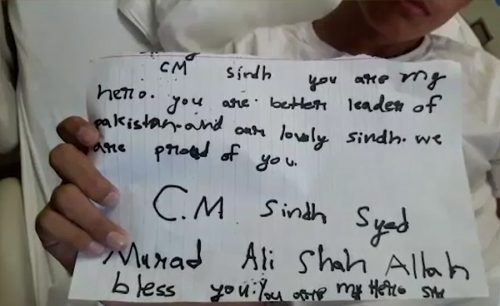 Earlier, the doctors expressed satisfaction with the improvement in the health of Muhammad Ahmed and the pipes had been removed from his throat. The teenage student had started eating normal food. The father of Muhammad Ahmed had confirmed that his son’s speaking power was recovering slowly and he was being given English language class beside physiotherapy. Previously, Muhammad Ahmed broke his sensitive bones of his neck after being strangulated and suffered a paralytic attack due to which his left limbs have been deadened.