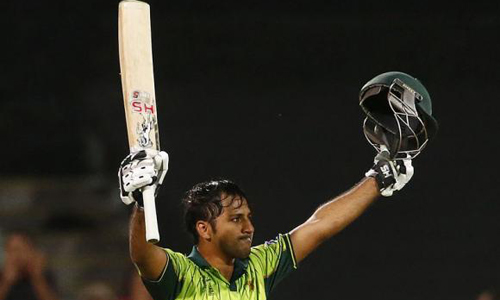 ADELAIDE – It was Pakistan's last roll of the dice that saw them throw Sarfraz Ahmed into the role of opener at the World Cup and the gamble looks to be paying off. With their opening partnerships producing a total of 22 runs in four matches, Pakistan brought Sarfraz in to partner Ahmed Shahzad against South Africa on March 7 in act of desperation. The pair put up 30 runs for the wicket but that figure, while more than the previous four partnerships combined, would have been higher had Shahzad not fallen cheaply as Sarfraz went on to score 49. On Sunday, Sarfraz put on an unbeaten 101, while opening partner Shehzad made 63 for a stand of 120 as Pakistan crushed Ireland in a seven-wicket win that sealed the 1992 champions' place in the quarter-finals. It was Pakistan's first century of the tournament and one they hope signals an end to the problems at opening which dogged them even before the start of the tournament. A week before the World Cup, Pakistan lost regular opener Mohammad Hafeez to a calf muscle injury and had to fly in Nasir Jamshed as a late replacement. They plucked Younus Khan out of the middle order and thrust him into the opener's role against India, but that gamble backfired spectacularly in a 76-run defeat by their arch-rivals. Shehzad partnered the woefully out-of-form Jamshed in the next three matches before Pakistan decided to gamble on Sarfraz, whose form coming into the World Cup was not very flattering either. "We tried him when we came here in New Zealand ... in these conditions he was not up to the mark," Pakistan captain Misbah-ul-Haq said after the win against Ireland. "He was not getting runs somewhere. He was just finding it difficult, even in the nets." However, Jamshed's poor form prompted them to try Sarfraz at the top, admitted Misbah. "Once we tried our specialist opener (Jamshed) we were just left with no choice, and we just got Sarfraz back at the top, and he responded really well." After the loss to India, Pakistan then fell to West Indies in their second pool match. They squeezed past Zimbabwe by 20 runs and then beat minnows United Arab Emirates by 129 in another unconvincing display. Stumper-batsman Sarfraz was then given the chance at opener and scored 49 in their campaign-reviving win against South Africa to go with the six catches he took behind the stumps. On Sunday, he scored his maiden ODI century and the team hope he will carry that form through to their quarter-final against Australia in Adelaide on Friday. Former captain Inzamamul Haq saw traces of batting great Javed Miandad in the 27-year-old's knock. "Sarfraz's elevation to the opener's slot in the last two matches gave Pakistan's middle-order enough cushion," Inzamam wrote in his column for the International Cricket Council (ICC) website. "Sarfraz reminds me Javed Miandad's art of rotating the strike. Whenever batsmen takes singles and twos, it not only disturbs and frustrates the bowlers but disallows them to explore the weak areas of the batsmen. And that's what exactly Sarfraz did on Sunday."