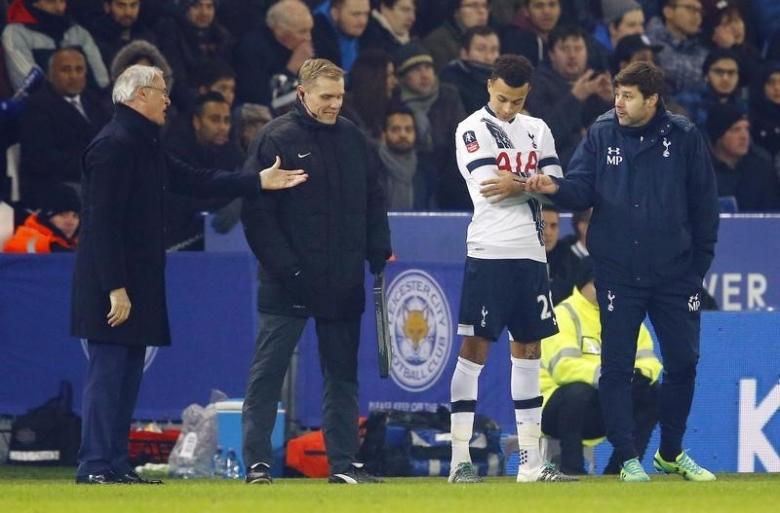 LONDON - A few months after duelling for the Premier League title, Tottenham Hotspur and Leicester City have yet to rediscover last season's killer consistency and both have a point to prove in Saturday's clash at White Hart Lane.
With Leicester flailing in midtable, having won three of their opening nine games, and Spurs having drawn their last two league encounters, both will crave a morale-boosting victory in north London. For Mauricio Pochettino's Spurs, who sit fifth in the table but just one point off the summit,victory will refuel a title challenge that has stuttered with draws to West Bromwich Albion and Bournemouth in their last two league matches. A defeat to Liverpool, albeit with a much-changed side, in the League Cup fourth round on Tuesday, left them without a win since the start of the month when their title credentials looked rock solid after a 2-0 home victory over Manchester City. For Claudio Ranieri's champions, Saturday's encounter will give them an opportunity to win back-to-back Premier League games for the first time since April and fire up a title defence that has looked forlorn in the opening months of the season. Heavy defeats to Chelsea, Manchester United and Liverpool, added to a narrow opening-day loss to Hull City, have left them nine points off the pace and looking a shadow of the side that relentlessly pursued wins against the odds last season. When the two sides last met in league at White Hart Lane in January, Leicester's 1-0 victory, courtesy of Robert Huth's late header, was seen as a sign that Ranieri's side had the mettle and stomach for a title challenge. Having lost all four of their away league games this season, another defeat would be taken as further proof of their demise since they lifted the trophy in May. With only one point separating the top five teams, a number of sides will have their eye on climbing to the summit over the weekend. Manchester City are currently heading the pack, courtesy of a better goal difference over Arsenal and Liverpool. Yet Pep Guardiola's side visit West Bromwich Albion on Saturday looking to win their first match in seven in all competitions after they were knocked out of the League Cup by rivals Manchester United 1-0 on Wednesday. United manager Jose Mourinho shrugged off a mini-crisis with Wednesday's victory and will now look to win his first league match in four and rebound from last weekend's dismal 4-0 defeat at Chelsea when they host Burnley on Saturday. Arsenal, who are unbeaten since the opening weekend of the season, visit Sunderland on Saturday, when Liverpool, who have also not tasted defeat since August, play at Crystal Palace. -Reuters