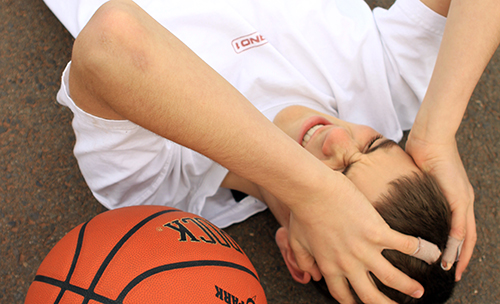 MONTREAL – The brain may show signs of concussion for months or years after the injury occurred, according to a Canadian study of college athletes. Using advanced MRI scans, researchers found evidence of brain shrinkage in the frontal lobes of athletes with a history of concussions compared to those who never had a concussion. The frontal lobe is involved in decision-making, problem solving and impulse control, but the researchers say it's unclear whether the concussion-related changes actually affected those abilities. They also found less blood flow to certain areas of the brain, mainly the frontal lobes. A decrease in blood flow means less oxygen to areas of the brain, which means the brain won’t function properly, said lead study author Dr Nathan Churchill of the Keenan Research Center of St. Michael's Hospital in Toronto. “If the frontal lobe is injured, you want to be concerned about how this can affect your life down the road,” he told Reuters Health. “There’s a huge body of evidence that shows this can have severe consequences.” Up to 3.8 million Americans are estimated to experience recreation-related concussions every year, according to a 2014 study by the US Department of Defense and National Collegiate Athletic Association. For the new study, Churchill and his colleagues recruited 43 varsity athletes, 21 male and 22 female, from a variety of contact and non-contact sports, including volleyball, hockey, soccer, American football, rugby, basketball and lacrosse. Twenty-one athletes had a history of concussion and 22 did not. Concussed athletes had their last injury at least nine months before the MRI scans, and half were 26 months or more post-concussion. Detailed brain maps created with the scans showed that athletes with prior concussions had a 10 to 20 percent drop in brain size in some areas of the frontal lobe, compared to those with no past concussions. Also, the athletes who'd had a concussion had 25 to 35 percent less blood flow in the frontal lobe region, which is vulnerable to injury because the front of the brain tends to collide with the skull during head impact. The structure of the brain's white matter, which connects different regions, also changed. These changes can't be easily interpreted as damage, but they look different from athletes with a history of more extensive injury, Churchill noted. "This tells us there is something different about white matter anatomy for young healthy athletes with concussion, but we're still investigating what that is," he said. In brains that were previously injured, an area known as the posterior cortex also increased in size, the researchers report in Journal of Neurotrauma. The brain has the ability to adapt, said Churchill. “If one part of the brain is injured, the other part of the brain can pick up the slack,” he said. But why and how this happens remains unclear. “We think it has to do with the brain recovering itself,” he said, “which is an interesting area in research - looking at how the brain reorganizes after an injury.” The bigger question is whether athletes with concussions should be monitored more closely, especially if they continue to participate in sports. “For the future, we hope studies like ours can help develop safer protocols,” he said. –REUTERS