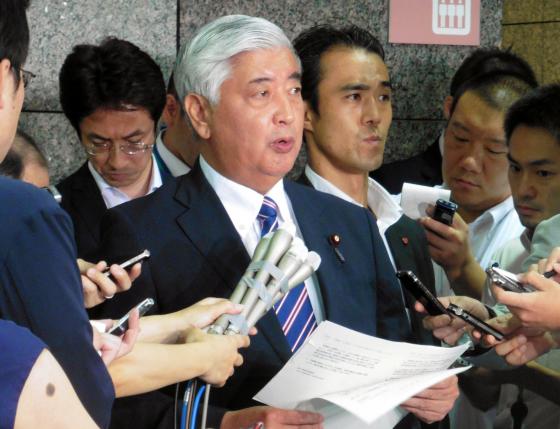 SEOUL - North Korea launched a ballistic missile on Wednesday that landed in or near Japanese-controlled waters for the first time, the latest in a series of launches by the isolated country in defiance of United Nations Security Council resolutions. The main body of the missile landed in Japan's economic exclusion zone, a Japanese defence official said, escalating regional tensions that were already high after a series of missile launches this year and the decision by the United States to place a sophisticated anti-missile system in South Korea. Japanese Prime Minister Shinzo Abe described the launch as a "grave threat" to Japan and said Tokyo "strongly protested". Japan also said its self-defence force would remain on alert in case of further launches. A US State Department spokesman condemned the launch, and said it would "only increase the international community's resolve to counter" North Korea's actions. The US Strategic Command said it had detected two missiles, one of which it said exploded immediately after launch. The missile that landed in the Sea of Japan was launched at about 7:50 a.m. Seoul time (2250 GMT Tuesday) from a region in South Hwanghae province to the southwest of the capital, Pyongyang, South Korea's Office of the Joint Chiefs of Staff said in a statement. The launch showed North Korea's ambition to "directly and broadly attack neighbouring countries and target several places in the Republic of Korea such as ports and airfields", the statement said, referring to South Korea by its official title. The missile appeared to be a Rodong-type medium-range missile that flew about 1,000 km (620 miles), it said. TENSIONS HIGH The United States will begin large-scale annual drills with its ally South Korea later this month that it bills as defensive in nature and not provocative. North Korea typically protests against the drills, which it says are a rehearsal for invasion. "The North Koreans seem to have been timing their recent short-range and medium-range missile tests to the weeks ahead of US-South Korean joint exercises," said Joshua Pollack, editor of the US-based Nonproliferation Review. "If the allies can exercise their armed forces, so can the North," he said. On July 19, North Korea fired three ballistic missiles that flew between 500 km and 600 km (300-360 miles) into the sea off its east coast. The North later said the launches were part of an exercise simulating preemptive strikes against South Korean ports and airfields used by the US military. The latest launches follow an agreement last month between South Korea and the United States to deploy an advanced Terminal High Altitude Area Defence anti-missile system in the South. North Korea had threatened a "physical response" against the deployment decision. The North came under the latest round of U.N. Security Council sanctions in March after its fourth nuclear test in January and the launch of a long-range rocket the following month. Tensions have been high on the Korean peninsula since the January nuclear test. The two Koreas remain technically at war under a truce that ended fighting in the 1950-53 Korean War. -Reuters