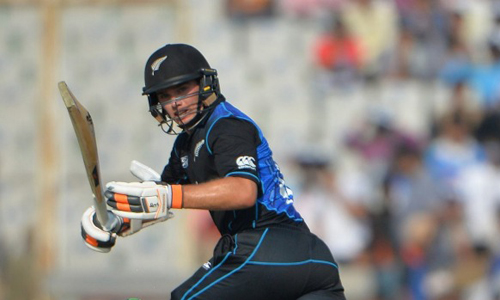 CHRISTCHURCH - Tom Latham and Colin Munro produced career high scores while Jimmy Neesham ripped the heart out of Bangladesh's top order as New Zealand secured a 77-run victory in their first one-day international at Hagley Oval in Christchurch on Monday. New Zealand scored 341 for seven, with opening batsman Latham scoring 137, while Munro blasted 87 from 61 deliveries in a 158-run stand. Neesham then took three wickets, including two in one over, as the visitors slumped to 81 for four after 18 overs which ensured they could not realistically challenge the total -- the equal highest for a one-day international at Hagley Oval. Scotland also scored 341, for nine wickets, against Canada in a World Cup qualifying match on Jan. 23, 2014. All-rounder Shakib Al Hasan, who took three for 69 in New Zealand's innings, scored an aggressive 59 and Mosaddek Hossain notched his first one-day international half century with 50 not out. Wicketkeeper Mushfiqur Rahim added 42 before he retired hurt with an apparent hamstring injury. The visitors' run chase was on par with New Zealand's innings, but Neesham ruined any chance of them launching an attack in the final 10 overs and they finished on 264 for nine in 44.5 overs. The controlled century by Latham was the first by a New Zealander in a one-day international at the ground. The 24-year-old also combined in a 48-run partnership with captain Kane Williamson (31) and 55 runs with the returning Neil Broom (22) to give New Zealand the foundation they needed before he and Munro built their imposing total. Latham brought up his second one-day century when he pulled a short Taskin Ahmed delivery onto the bank for his third six, moving from 95 to 101 in 100 balls. He quickly surpassed his previous highest score of 110 not out against Zimbabwe before he was dismissed in the 48th over. The second game of the three-match series is in Nelson on Thursday, with the third at the same venue two days later. -Reuters