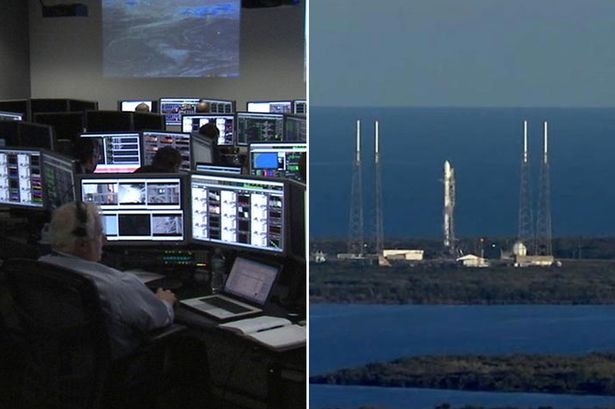 The NASA launch of a £223 million deep-space weather satellite was called off just minutes before launch. The SpaceX rocket was supposed to take off at 11.10pm last night (UK time) from Cape Canaveral Air Force Station in Florida. But about two-and-a-half minutes before liftoff, a problem cropped up with an Air Force radar system needed to track the rocket in flight. The next chance to launch is 11:07pm today, said NASA launch commentator Michael Curie. The rocket carries the Deep Space Climate Observatory, nicknamed DSCOVR, a joint project by NASA and the National Oceanic and Atmospheric Administration. DSCOVR is expected to replace a 17-year-old satellite monitoring for potentially dangerous solar storms. Tsunamis of charged particles from the sun, called 'coronal mass ejections', can disrupt GPS and other satellite signals, block radio communications and impact electric power grids on Earth, NOAA said. "We think of DSCOVR as a weather buoy," NOAA administrator and former astronaut Kathryn Sullivan said during a NASA launch webcast. "It senses first the blasts of solar wind and embedded magnetic fields that are potentially going to wreak some havoc." Following launch, DSCOVR will take more than three months to reach its operational orbit around the sun, almost 1 million miles inward from Earth. The satellite's original mission, championed by then-Vice President Al Gore, was to provide a near-continuous view of Earth that would be distributed via the internet in an attempt to raise environmental awareness. The satellite, then called Triana - and spoofed as "GoreSat" - was due to launch on the ill-fated space shuttle Columbia mission in 2003. But it was pulled from the manifest and put into storage after President George W Bush moved into the White House. A decade later, Triana was refurbished and reborn as the DSCOVR solar observatory. As well as instruments to study the solar wind, it has two sensors that can measure ozone and monitor droughts, flooding and fires. The satellite also will take pictures of Earth every two hours that will be posted on the Internet the next day. "The opportunity for every man, woman and child who lives on the Earth to see their own home in the context of the whole can add to our way of thinking about our relationship to the Earth," Gore, who was at the Kennedy Space Center to watch the launch, told reporters. Web Report