ISLAMABAD (92 News) – The launching ceremony of first indigenously designed Fast Attack Craft (Missile)/ FAC(M) – 4 being built for Pakistan Navy – was held at Karachi Shipyard and Engineering Works (KS&EW). Federal Minister for Defence Production Zubaida Jalal graced the occasion as chief guest. FAC (M) – 4 is a state-of-the-art, multi mission vessel having length of 63m and displacement of over 560 tons. It is propelled by 04 shafts and has speed of 30 knots. It will be equipped with indigenously developed anti-ship missiles and sensors. The vessel has been indigenously designed by Maritime Technologies Complex (MTC). Speaking on the occasion, Federal Minister for Defence Production Zubaida Jalal congratulated Pakistan Navy, MTC and KS&EW for this remarkable achievement towards the national goal of indigenization and self-reliance. 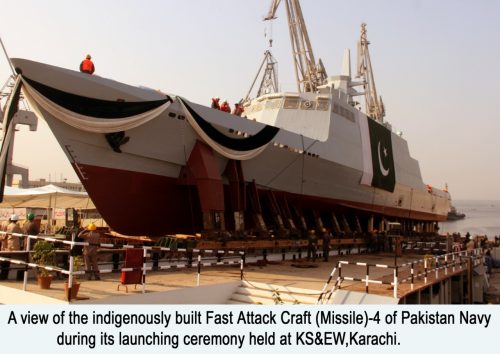 She said that KS&EW is one of the few public sector industries which have made remarkable turnaround in the last decade and transformed into a sustainable profit generating entity of MoDP. “In view of future economic growth of the country, the ministry is vigorously pursuing establishment of new shipyards.” She noted that this missile craft will effectively safeguard the sea frontiers of the country. Earlier, Managing Director KS&EW, Rear Admiral Ather Saleem in his welcome address thanked MoDP and Pakistan Navy for their continued support. He further added that during recent years, KS&EW has completed various projects at par with international quality standards. “As a result, Pakistan Navy has reposed its confidence in Karachi Shipyard by awarding construction contracts for MILGEM Class ships, HANGOR class submarines and bollard tugs. Construction of both tugs has commenced while preparations for construction of MILGEM class ships and HANGOR class submarines are progressing as per plan.” 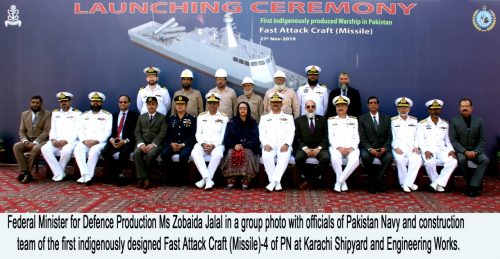 He assured that KS&EW is committed to completing all these challenging projects on time, within allocated budget while meeting international quality standard. The ceremony was attended by large number high ranking officials / dignitaries from federal and provisional governments, Pakistan Navy and KS&EW.