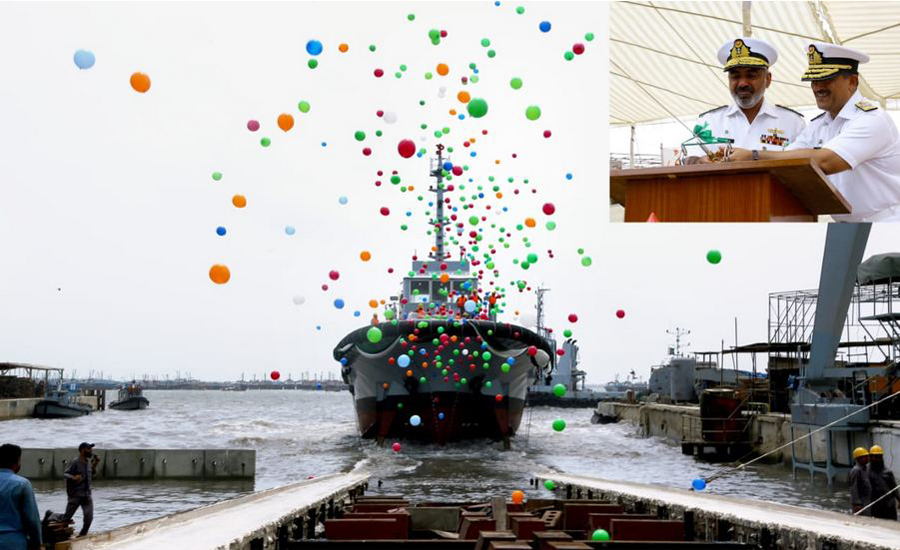 KARACHI (92 News) – The launching ceremony of 32 Tons Bollard Pull (BP) Tug PNT Niaz being built for Pakistan Navy was held at Karachi Shipyard and Engineering Works (KS&EW). Rear Admiral Moazzam Ilyas, Commander Coastal Command (COMCOAST), graced the occasion as chief guest. KS&EW has so far constructed 24 Tugs ranging from 10-40 Tons BP for its customers. This tug has 34 meters overall length, with displacement of 481 tons and maximum speed of 12 knots. The chief guest, in his address, appreciated Pakistan Navy and KS&EW for their valuable contribution towards attaining goal of self reliance in shipbuilding as this is the third tug of the same series for Pakistan Navy being indigenously constructed by Karachi Shipyard. He said that Pakistan Navy is continuously entrusting Karachi Shipyard with the new projects and latest in the line are 2 x Frigates which are likely to be signed soon. Highlighting the importance of CPEC, he said the Naval Headquarters is pursuing the establishment of a new shipyard at Gwadar which has already been approved by the federal government. Earlier MD KS&EW, Rear Admiral Ather Saleem said that Karachi Shipyard is fully cognizant and completely aligned with the goals set forth by the government and Pakistan Navy of pursuing self-reliance in defence shipbuilding industry. This 32 Tons Bollard Pull Tug is a testimony of the commitment to this daunting challenge. While highlighting current production activities of KS&EW, he said that presently 6 x shipbuilding projects are simultaneously being constructed at KS&EW.