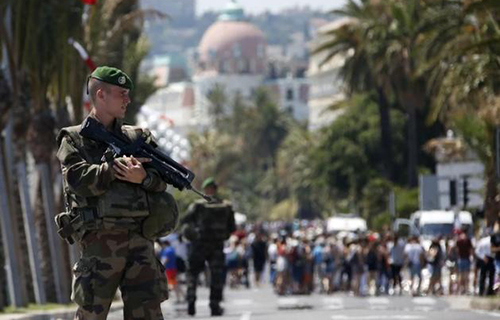 PARIS – French lawmakers on Wednesday approved a six-month rollover of emergency rule in the wake of last week's truck attack on the city of Nice, the third deadly assault in 18 months for which the Islamist State militant group has claimed responsibility. The extension of extra search-and-arrest powers for police was approved by 489 votes to 26 against shortly before dawn in France's National Assembly, the lower house of parliament. Prime Minister Manuel Valls, jeered by crowds at a remembrance ceremony last Monday and criticized by political opponents over the attack, called for national unity when presenting the emergency rule bill overnight. "We must remain united and focused because we must be strong in the face of this threat," he said. "Populism stalks us, ready to pounce at any opportunity, to blow on the embers of discord and exacerbate divisions, as every new division makes us more vulnerable." In response to demands of the main right-wing opposition party, Les Republicains, the rollover was backed for six months rather than the three months proposed by President Francois Hollande's Socialist government, which has been accused by its political adversaries of failing to prevent the attack. The bill extending emergency rule into January 2017, due to be examined by the Senate upper house of parliament later on Wednesday before becoming law, allows police to search homes and arrest people without prior consent from judges. It also allows them to tap computer and phone communications more freely. Emergency rule has been in place since the attacks on Paris last November in which Islamist militants killed 130 people. In the attack in the Riviera resort of Nice, Tunisian Mohamed Lahouaiej Bouhlel drove a large truck into crowds of Bastille Day revelers, killing 84, before being shot dead by police. Around 38 of the 84 dead were foreigners. –REUTERS