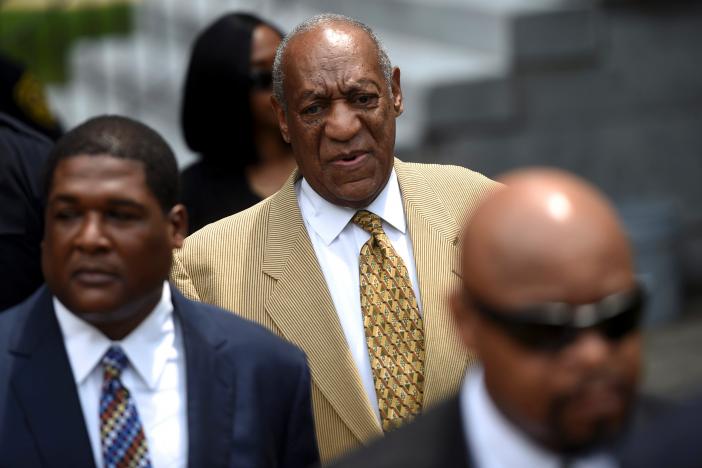 LOS ANGELES - The lawyer for a woman accusing Bill Cosby of abuse in a California civil suit said she has canceled plans to take a sworn deposition from another woman listed as a potential witness against the comedian in a Pennsylvania criminal case. Attorney Gloria Allred said the criminal sexual assault case Cosby faces in suburban Philadelphia takes precedence over the lawsuit her client, Judy Huth, has brought against the 78-year-old entertainer in Los Angeles and could be undermined by the deposition in question. Former donut shop employee Margie Shapiro, one of dozens of women who have come forward publicly in recent years to accuse Cosby of sexual wrongdoing, had been subpoenaed by Allred to give a deposition this coming Friday in Huth's civil case. But Allred said she decided to withdraw the subpoena after prosecutors included Shapiro in a list of 13 women they have asked the Pennsylvania judge for permission to call as witnesses in Cosby's criminal trial next June. Allred also asked the judge in Huth's civil suit to freeze any further discovery in the case, including a separate deposition of Shapiro sought by Cosby's lawyers, until the criminal case is resolved. Cosby attorney Angela Agrusa opposed that move, and the judge set a hearing for Nov. 4 on the issue. Allowing Shapiro to be deposed in the civil case would give Cosby's criminal defense team a glimpse of what Shapiro might say under oath at his criminal trial and a chance to find inconsistencies they could later exploit under cross-examination. "We think that they are attempting to use civil discovery to get around the limits on criminal discovery in the criminal case," Allred told reporters after Tuesday's status conference on the lawsuit in Los Angeles County Superior Court. Agrusa suggested Allred had something to hide and accused her of trying to "have it both ways." "Ms. Allred can't go around saying these women's stories are critical to her client's case and then just because they might be called in a criminal case now claim we can't depose them," Agrusa told Reuters. "To take the position that ... their allegations can't be challenged denies Mr. Cosby his fundamental right to ask questions of his accuser." Cosby, who built a long career on family friendly comedy, including his long-running NBC sitcom "The Cosby Show," has steadfastly denied ever assaulting anyone and insisted that all his sexual encounters were consensual. He is charged in Pennsylvania with drugging and sexually assaulting a former Temple University employee, Andrea Constand, at his home in 2004. Huth, now in her 50s, alleges in her lawsuit that Cosby plied her with alcohol and molested her in 1974 at the Playboy Mansion when she was aged 15. -Reuters