Lawsuit targets US program on suspicious behavior at airports 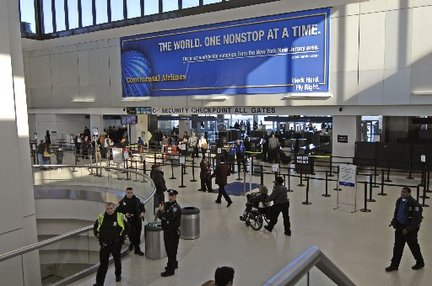 Lawsuit targets US program on suspicious behavior at airports

WASHINGTON - A civil liberties group on Thursday sued the US government for information about a program that screens airport passengers using behavior detection techniques that it says is a vehicle for racial and religious profiling. The effectiveness of the Transportation Security Administration program, which uses thousands of TSA employees to screen nearly 2 million airline passengers daily for fear, stress and other behavior, has been questioned by government watchdogs and in congressional hearings. An American Civil Liberties Union lawsuit filed on Thursday seeks to force the TSA to hand over documents about the Screening Passengers by Observation Techniques (SPOT) program. "The TSA's use of behavior techniques has given rise to numerous allegations of racial and religious profiling," the lawsuit said. The ACLU said passengers and TSA officers reported witnessing other officers screen people of Middle Eastern appearance, African-Americans, Hispanics and other minorities "solely on the basis of their race." The ACLU in October made a Freedom of Information Act (FOIA) request for TSA documents on SPOT, including evaluations, assessments, passengers referred for additional screening as well as their race, ethnicity and any arrests. The agency has not yet provided any records and denied its request for expedited handling and a fee waiver, the ACLU said in the lawsuit, filed in US District Court for the Southern District of New York. "The TSA has insisted on keeping documents about SPOT secret, but the agency can't hide the fact that there's no evidence the program works," said ACLU lawyer Hugh Handeyside. A TSA official said the agency had not seen the lawsuit and that the FOIA request was still being processed. Two federal government audits in 2013 found that the TSA could not assess whether SPOT, which had cost $900 million by that time, worked. The program was started in 2006. Allegations were raised about racial profiling at airports in Boston, Newark, New Jersey, and Honolulu in particular. The TSA administrator at the time, John Pistole, defended the program during subsequent congressional hearings and said the agency guards against racial profiling. A congressman who requested one of the audits said on Wednesday he was not satisfied with the program. "After years of requests and over a billion dollars spent, we still have not received independent scientific validation from TSA on the SPOT program," US Representative Bennie Thompson, a Democrat from Mississippi, said in a statement. - Reuters