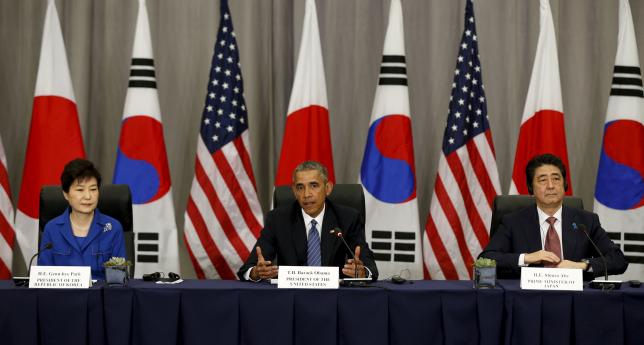 WASHINGTON – US President Barack Obama joined with South Korean President Park Geun-hye and Japanese Prime Minister Shinzo Abe on Thursday to present a united front over what he called "provocations" committed by North Korea in its recent nuclear and missile tests. Meeting on the sidelines of a global nuclear security summit in Washington, the three leaders recommitted their countries to each other’s defense and warned they could take further steps to counter threats from Pyongyang. “We are united in our efforts to deter and defend against North Korean provocations,” Obama told reporters. “We recognize that our security is linked, that we have to work together to meet this challenge." Relations between Park and Abe have been frosty in the past, but the two have been brought together in recent months by shared concerns about North Korea, which conducted a fourth nuclear bomb test on Jan. 6 and launched a long-range rocket into space last month. The United States has sought to encourage better relations between Seoul and Japan, its two biggest allies in Asia, given worries not only about North Korea but also an increasingly assertive China. Obama was due to meet later on Thursday with Chinese President Xi Jinping, whose government is considered the most capable of influencing North Korea’s reclusive leadership. Speaking with Abe and Park seated beside him, Obama appeared to allude to Beijing when he insisted that it important for the entire international community to “vigilantly enforce” new sanctions against North Korea. Expanded U.N. sanctions aimed at starving North Korea of funds for its nuclear weapons program were approved in a unanimous Security Council vote in early March on a resolution drafted by the United States and China. Obama said the three leaders directed their teams to work diligently to come up with additional steps they can take collectively to ensure a denuclearized Korean Peninsula and to restore a sense of stability and peace to the region. Park said the leaders had discussed ways to keep North Korea from upgrading its nuclear capabilities, and Abe said he was committed to strengthening trilateral security cooperation. 'DIRTY BOMB' WORRIES The meeting took place as world leaders gathered in Washington for a two-day summit hosted by Obama and focused on securing vulnerable atomic materials to prevent nuclear terrorism. North Korea’s nuclear defiance was also high on the agenda. With less than 10 months left in office to follow through on one of his signature foreign policy initiatives, Obama was due to convene his fourth and final Nuclear Security Summit. While progress has been made, some arms-control advocates say the diplomatic process seems to have lost momentum and could slow even further once Obama leaves office in January. A boycott by Russian President Vladimir Putin, apparently unwilling to join in a U.S.-dominated gathering at a time of increased tensions between Washington and Moscow, adds to doubts that the latest meeting will yield major results. The deadly militant bomb attacks in Brussels this month have fueled concern that Islamic State could eventually target nuclear plants, steal material and develop radioactive “dirty bombs,” a topic that may well be uppermost in leaders’ minds as they meet. –Reuters