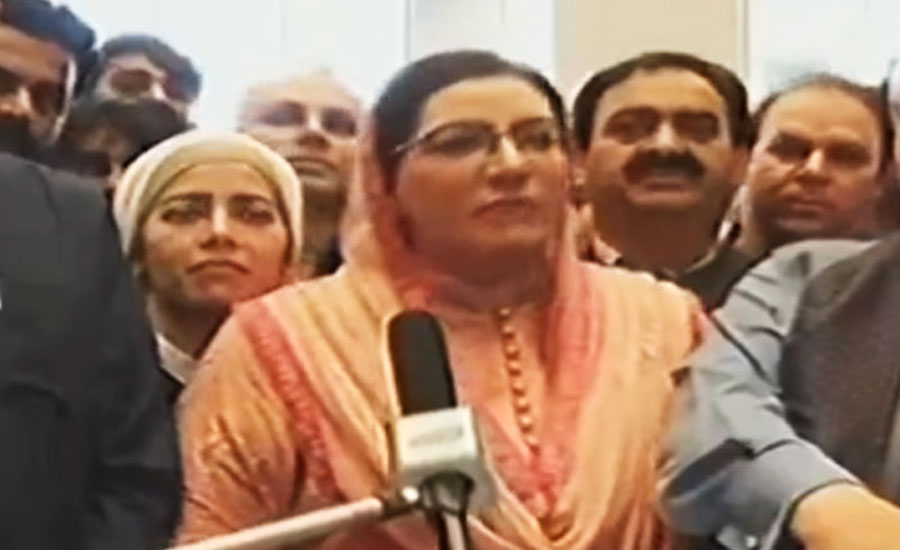 ISLAMABAD (92 News) – Special Assistant to Prime Minister on Information Firdous Ashiq Awan has said that the leaders like Imran Khan live in people's hearts and will also remain alive in pages of history on Sunday. Speaking to the journalists after welcome reception to Prime Minister Imran Khan at Islamabad airport, the special assistant said a large number of people have gathered at the airport to pay rich tribute to Imran Khan's efforts in highlighting Kashmir issue and sensitizing the world community on Islamophobia, during his speech at the UN General Assembly last Friday. Firdous Ashiq Awan also said convergence of a large number of people to accord grand reception to their beloved leader indicates that they are happy over the premier inspiring speech at the world forum. She said PM Khan represented the oppressed people across the world, including Kashmiris. She said Imran Khan also portrayed real face of Islam. She said some elements tried to do politics in the name of honor of the Prophet [Peace Be Upon Him]. Without naming JUI-F’s proposed Azadi March, the special assistant said they should work for the freedom of Kashmiris.

PM accorded outstanding reception after his successful US visit

Earlier, PM Imran Khan was accorded an outstanding reception on his arrival at Islamabad International Airport, after his successful US visit at the UN General Assembly session. Imran Khan has landed in the federal capital Islamabad after concluding his successful visit to the US where he delivered a historical speech in the 74th session of the United Nations General Assembly (UNGA) on September 27. As he made his way to the main hall, loud cheers were heard from the crowd numbering in hundreds. Prime Minister Imran Khan, who has just landed at Islamabad airport, will be given an outstanding reception. Upon his arrival at the Islamabad airport, PM Imran Khan received warm welcome from federal ministers, cabinet members, other legislators, central leaders of the ruling Pakistan Tehreek-e-Insaf and a large number of PTI activists crowded to meet him. Special arrangements were made prior to the arrival of the premier at Islamabad airport as his special flight was scheduled to land at 4:30 pm. A large number of activists arrived at the Islamabad International Airport in shape of rallies from Lahore, Faisalabad and Peshawar. Convoys of cars and pickup trucks carrying PTI workers from different parts of the country were seen entering the capital ahead of the prime minister’s arrival. Videos posted on social media showed the workers waving flags of the ruling party and Azad Kashmir.