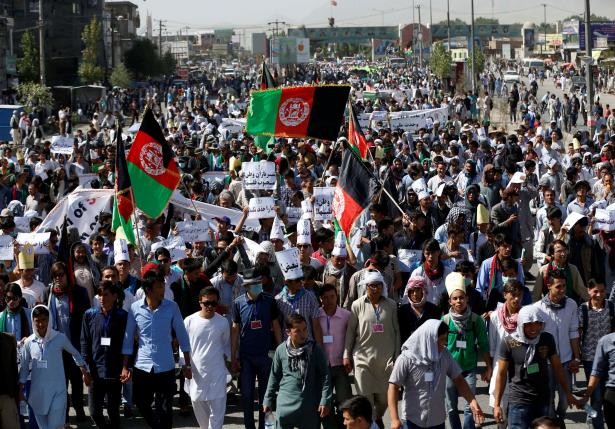 KABUL – Suicide bombers hit a large demonstration by members of Afghanistan's Hazara minority in Kabul on Saturday, killing at least 80 people and wounding 231, officials said. Graphic television footage from the site of the blasts showed many dead bodies lying on the bloodied road, close to where thousands of Hazara had been demonstrating over the route of a planned multimillion dollar power line. Mohammad Ismail Kawousi, a spokesman for the ministry of public health, said at least 80 dead and 231 wounded had been taken to nearby hospitals but the numbers may change. It was not immediately clear how many bombs were involved in the attack. Emergency vehicles were at the site and wounded were being carried away. Much of the city center had been sealed off with stacks of shipping containers and other obstacles as the march began earlier on Saturday, and security was tight with helicopters patrolling overhead. There was no immediate claim of responsibility for the blasts, which came some three weeks after a suicide bomber killed dozens of people in an attack on newly graduated police cadets that was claimed by the Taliban. "Opportunist terrorists went among the protestors and set off explosions that killed and wounded a number of our countrymen including security and defense personnel," President Ashraf Ghani said in a statement. Saturday's demonstrators had been demanding the 500 kV transmission line from Turkmenistan to Kabul be rerouted through two provinces with large Hazara populations, an option the government says would cost millions and delay the badly needed project by years. The Persian-speaking Hazara, a mainly Shia group estimated to make up about 9 percent of the population, are Afghanistan's third-largest minority but they have long suffered discrimination. Thousands were killed under Taliban rule. The protest by a group whose leaders include members of the national unity government had put pressure on President Ashraf Ghani, who has faced growing opposition from both inside and outside the government. It also risked exacerbating ethnic tensions with other groups and provinces the government says would have to wait up to three years for power if the route were changed. The transmission line, intended to provide secure electricity to 10 provinces is part of the so-called TUTAP project backed by the Asia Development Bank, linking energy-rich states of Central Asia with Afghanistan and Pakistan. Hazaras say they want the line to come through Bamyan and Wardak provinces, west of Kabul, where many Hazaras live, to ensure their power supply. The government says the project already guarantees ample power to the two provinces and denies it disadvantages Hazara people. Under current plans, due to be implemented by 2018, the line will pass from a converter station in the northern town of Pul-e Khumri to Kabul through the mountainous Salang pass. An earlier plan foresaw a longer route from Pul-e Khumri through Bamyan and Wardak, but this option was dropped.  Meanwhile, Prime Minister Nawaz Sharif, PPP chairman Bilawal Bhutto and PTI chairman Imran Khan have condemned the Kabul blast.– Reuters/92 Nawaz