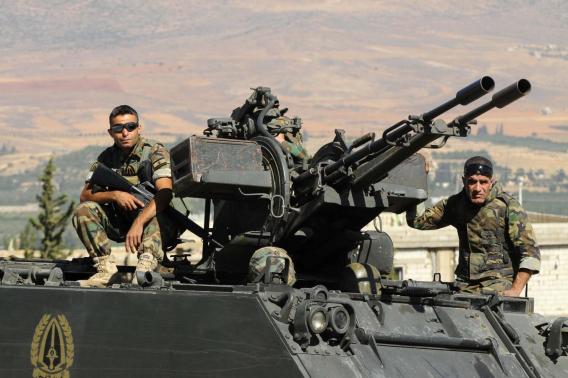 BEIRUT - Lebanon's army said on Tuesday that it had captured two militants, one of whom beheaded a Lebanese soldier who was held by hardline Islamist gunmen along with around two dozen servicemen still in captivity. A statement from the army said that Omar Mikati and Bilal Mikati were captured on Tuesday morning and are being held on charges of belonging to a terrorist organization and that one was suspected of killing a soldier. A Lebanese security source said both men are Lebanese. Spillover from the Syrian conflict has repeatedly jolted neighboring Lebanon. Militants affiliated to the al Qaeda-linked Nusra Front and Islamic State are demanding the release of Islamists held by the Lebanese authorities in exchange for the captured members of the security forces. Four soldiers have been killed by the militants since August. Many Sunni Syrian rebels and Lebanese Sunni Islamists accuse Lebanon's army of working with the Lebanese Shi'ite movement Hezbollah, which has sent fighters to aid Syrian President Bashar al-Assad. Islamic State has declared a caliphate and seized wide areas of Iraq and Syria, Lebanon's neighbor to the east. The Lebanese security forces have cracked down on the group's sympathizers and the intelligence services have increased vigilance on the borders with Syria. - Reuters