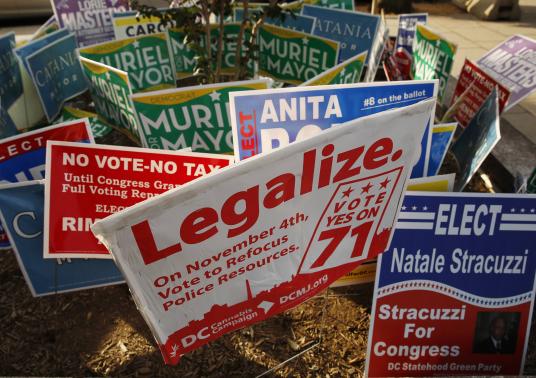 WASHINGTON (Reuters) - Possession of small amounts of marijuana became legal in the District of Columbia on Thursday, launching a pot "green rush" despite a face-off between local officials and the Republican-led US Congress over the new standards. The US capital joined Washington state, Alaska and Colorado in making marijuana lawful for recreational use, reflecting a rapidly shifting legal landscape for the drug. It remains illegal under federal law. "Nationwide, it (legalization) is clearly symbolic in its ability to impact other places" in the United States, said Allen St. Pierre, executive director of NORML, the National Organization for the Reform of Marijuana Laws. He called the new legal framework "depenalization" since sales were still barred, and said it was unlikely to unseat a thriving black market. City finance officials have estimated the marijuana market at $130 million a year. Initiative 71, a ballot measure legalizing marijuana possession that was approved by 65 percent of District of Columbia voters in November, took effect at 12:01 a.m. Oregon voters approved a similar measure in November, but marijuana does not become lawful there until July. The District of Columbia law allows adults to possess up to 2 ounces (56 grams) of marijuana and to grow six plants at home, three of them mature. Sales are barred but transfers of up to 1 ounce (26 grams) are legal. Bongs, pipes and other paraphernalia are legal but public smoking is not. Marijuana is barred in about 20 percent of the city that is federal land. Mayor Muriel Bowser and other city officials vowed on Wednesday that legalization would go ahead despite warnings from Republicans on the House of Representatives Oversight Committee that the move was illegal. Committee Chairman Jason Chaffetz of Utah contends a December spending bill had barred the District of Columbia from spending funds to make pot legal or lessen penalties. Congress has oversight over the District of Columbia. Legalization has fueled what NORML's St. Pierre called a "green rush" for entrepreneurs, users and growers eager to explore the law's limits and loopholes. Michael Bayard, owner of Capital City Hydroponics, which sells indoor gardening equipment, said business had gone up about 50 percent since January as legalization neared. The store sells home marijuana kits for $420 to $1,200. "We're ready for the influx of people looking for exactly that kind of garden," he said. A marijuana expo sponsored by ComfyTree, a Michigan cannabis consultancy, and set for Saturday and Sunday has drawn dozens of exhibitors and hundreds of registered visitors. The DC Cannabis Campaign, which spearheaded Initiative 71, plans to hold a seed exchange next month. The group's leader, Adam Eidinger, whose paraphernalia shop was shut by police two years ago, is on course to re-open it.