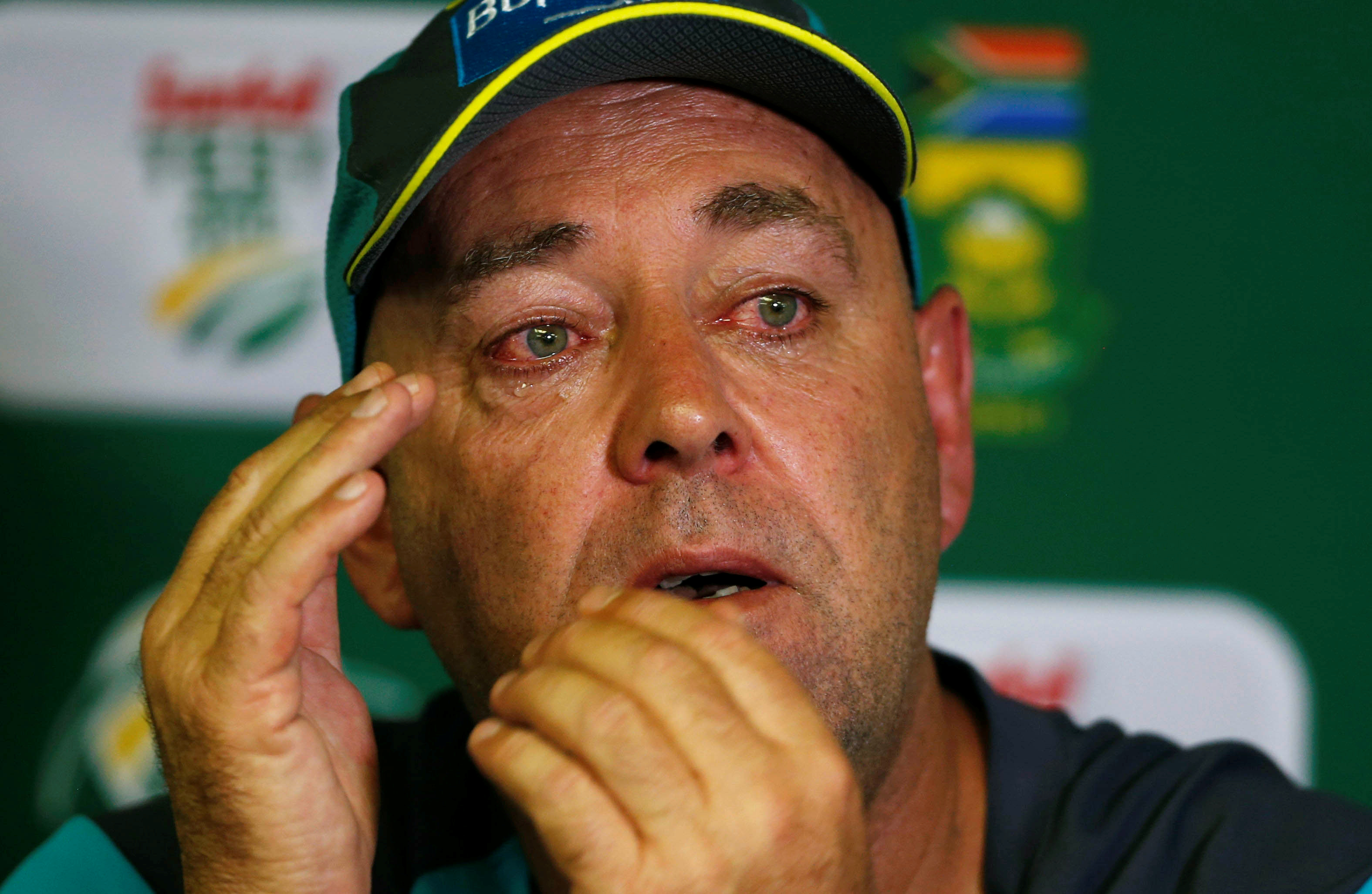 JOHANNESBURG/SYDNEY (Reuters) - Australia coach Darren Lehmann said on Thursday he would step down after this week’s test match against South Africa, as he took ultimate responsibility for the culture of a team embroiled in a ball-tampering scandal that has rocked the sport. Lehmann, who had previously told reporters he would not stand aside, said that his decision was due in part to the abuse his family received after three Australia players conspired to scuff up the ball with sandpaper during the third test against South Africa. Cricket Australia had cleared Lehmann of wrongdoing this week following an investigation that saw sacked captain Steve Smith and vice-captain David Warner banned for 12 months. Batsman Cameron Bancroft was suspended for nine months. In an emotional media briefing, Lehmann, who had also come under fire for what critics called a toxic culture within the team, said his decision was voluntary. “Ultimately I’m responsible for the culture of the team. I’ve been thinking about my position for a while, despite telling media yesterday that I’m not resigning,” he told reporters in Johannesburg on Thursday. “My family and I got a lot of abuse over the last week. Speaking to my family, it’s the right time to step away.” His resignation came after former test captain Smith broke down in tears of remorse as the three disgraced cricketers at the centre of the Cape Town scandal made apologetic returns to Australia on Thursday. Smith was unable to complete his news conference at Sydney Airport and was ushered out of the room after a short display of raw emotion during which he repeatedly apologised for his misjudgement. Batsman Bancroft spoke of his shame on his arrival in Perth and former vice captain Warner, scheduled to land in Sydney later in the evening, took to social media to apologise for his role in the cheating.

“To all of my team mates, to fans of cricket all over the world and to Australians who are angry and disappointed, I’m sorry,” Smith told reporters in a prepared statement. “It was a failure of leadership, of my leadership, I’ll do anything I can to make up for my mistake and the damage it has caused,” he added, breaking down for the first time. “Cricket is the greatest game in the world. It’s been my life and I hope it can be again. I’m sorry and I’m absolutely devastated.” Warner, who was identified as the instigator of the attempt to cheat by the Cricket Australia probe, broke his silence via Instagram, apologising and taking responsibility for his “part” in the scandal. “I understand the distress this has caused the sport and its fans,” the opening batsman wrote. “It’s a stain on the game we all love and I have loved since I was a boy.” Bancroft confessed to having lied about using sticky tape rather than sandpaper to scuff the ball in Cape Town in the news conference immediately after the incident last Saturday. “I lied. I lied about the sandpaper,” the 25-year-old told reporters. “I panicked in that situation and I’m very sorry. I feel like I’ve let everyone down in Australia.”

After four days of almost universal condemnation for the trio in Australia, the severity of the punishments brought some support. Spin-bowling great Shane Warne, while condemning the cheating, said the hysteria whipped up by anti-Australian feeling around the cricketing world had led to overly harsh punishments. “The hysteria has gone world wide, and everyone that dislikes the way the Australian cricket team has played ... has been given the opportunity to lay the boots in,” he said. One of those was former Australia and current Pakistan coach Mickey Arthur, who wrote that the scandal was an inevitable result of an unwillingness to improve the culture in the country’s entire cricket set-up. “An incident like this had to happen for the necessary cultural shift to take place. Australian cricket has been in an ivory tower for too long,” he said. The incident has also triggered an International Cricket Council (ICC) review of the players’ code of conduct to curb on-field misdemeanours. “What happened down there has certainly created additional urgency that something needs to be done as quickly as possible,” chief executive David Richardson said on Thursday. Better behaviour will be expected when Smith’s replacement Tim Paine leads out the team in the fourth test in Johannesburg on Friday, looking to even up the series at 2-2 but most importantly start restoring the good name of Australian cricket.