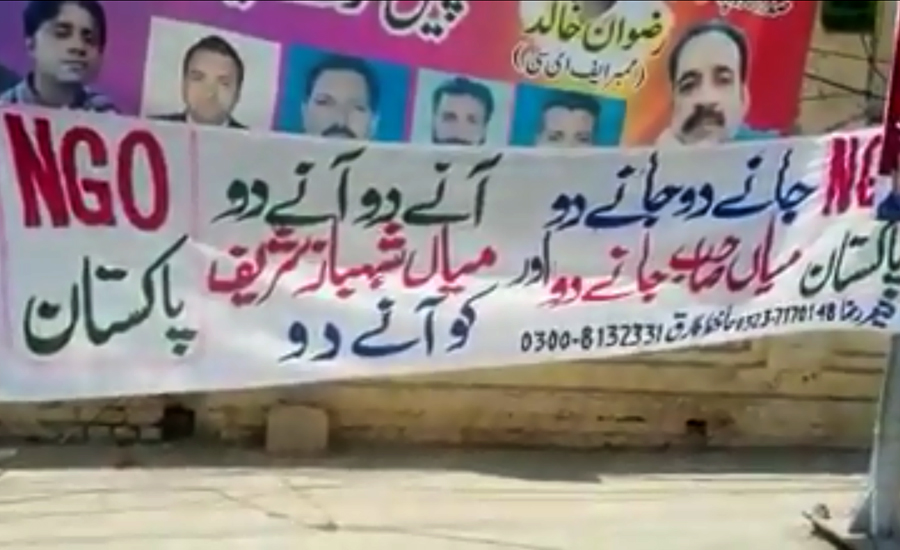 LAHORE (92 News) – Two days after the Supreme Court reserved its judgment in Panamagate case against the prime minister and his family, banners asking Nawaz Sharif to let Punjab Chief Minister Shahbaz Sharif take over have been displayed in the provincial capital. The banners can be seen at Mall Road, Garhi Shahu, Davis Road outside Lahore Press Club and other adjoining places. The banners displayed by a company inscribed with slogans “Jane Do Jane Do Mian Sahib Jane Do”, “Ane Do Ane Do Mian Shahbaz ko ane do”. Earlier, the Supreme Court had July 21 reserved the judgment in the Panama Papers case in which Prime Minister Nawaz Sharif and his family are accused of amassing assets abroad through offshore companies and concealing the information from tax authorities. The assets under the microscope are four apartments in Park Lane area of London. The date of announcement of the verdict had not been given. If convicted, Nawaz Sharif can face disqualification from politics. The case has dominated headlines in Pakistan for over a year and most government ministers, including the Prime Minister himself and opposition leaders, are only focusing to speak on this case. Pakistani Tehrik-e-Insaf of Imran Khan filed a petition in the apex court following the publication of Panama Papers. In April last, Mr. Sharif narrowly escaped when the Supreme Court, in a 3-2 judgment, ordered an inquiry against him. Two judges in the minority judgment claimed that he was not truthful. A judge even referred to him as a godfather and used strong words like ''Sicilian mafia''. A Joint Investigation Team (JIT) was formed by the judges to ascertain whether the Sharifs used legitimate means to purchase the flats. The JIT concluded last week in a damning report that the premier and his children were living beyond their means and submitted forged documents to conceal their assets. Nawaz Sharifs' lawyers still deny the allegations.