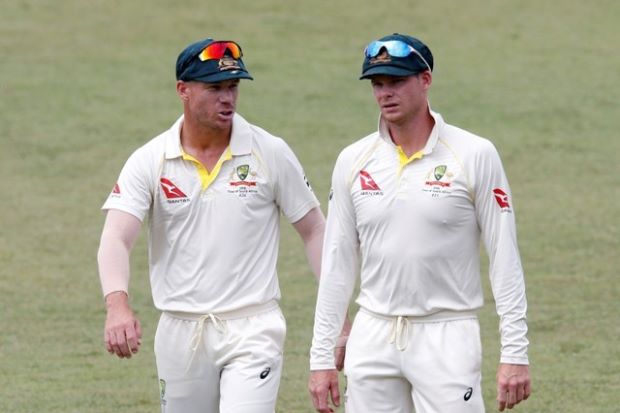 SYDNEY (Reuters) - The Australian Cricketers’ Association (ACA) called on Tuesday for the immediate lifting of lengthy bans imposed on Steve Smith, David Warner and Cameron Bancroft after the release of a scathing report into the culture of Australian cricket. Among the findings, the review said that to view the ball-tampering scandal which led to the bans as “the failure of a handful of players” would be a mistake. Smith and Warner are seven months into one-year bans, while Bancroft will be eligible to return in December after his suspension for attempting to tamper with the ball during a Test against South Africa in Cape Town in March. Greg Dyer, the head of the Australian players’ union, said all three players had been punished enough. “Given there is now independent verification that CA’s system and culture were contributory factors, the ACA calls for the lifting of the board-imposed penalties on Steve Smith, David Warner and Cameron Bancroft,” ACA chief Dyer told a news conference in Melbourne. “The players have already lost time in the game, lost chances to play for Australia, endured public humiliation and faced massive financial penalties. “My message to Cricket Australia is this: these contrite men have suffered enough. Let them play.” Cricket Australia (CA) Chairman David Peever, in his reaction to the review made it clear that the board had handed out the sanctions after “full and thoughtful process” and that they would remain in place. Former Australia coach Darren Lehmann, who stood down in the wake of the scandal, also joined calls to have the bans set aside and allow the trio to return to state and international cricket. “I think they should be back but it’s up to the board to make that decision, not me,” Lehmann told the Sydney Morning Herald. “I think the general feeling around Australia, certainly the people I talk to, is they want them playing again, at worst domestic cricket. “Now the findings have come down they should be reviewing the sanctions on the three players.” While Lehmann’s view of the mood of the Australian public might be reflective of the “bubble” the review said surrounded top players, Test greats Shane Warne, Adam Gilchrist and Doug Walters have also called for a reduction to the bans. Test paceman Josh Hazlewood said the players would like to see former captain Smith, vice-captain Warner and batsman Bancroft back on the field. “We’d love to see the guys back playing as soon as possible. That’s not really our decision,” he told a news conference. “The bans have been handed down and the boys have copped them, as you’d expect. That’s really out of our hands, as players.”