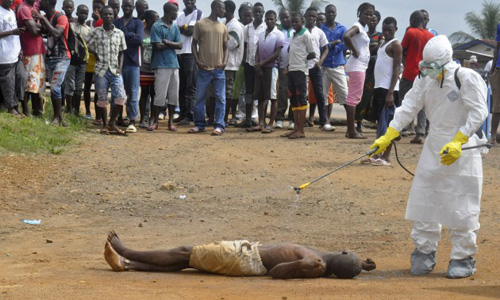 MONROVIA - Liberia's last Ebola patient left hospital on Thursday to cheers of delight from friends and family, a year after the West African country reported its first case. Liberia's capital, Monrovia, was once at the heart of an epidemic that has killed nearly 10,000 across West Africa. Liberia has reported no new Ebola cases in 13 days, but can be deemed Ebola-free only after 42 days have passed -- double the normal incubation period for the virus. Dressed in a bright orange T-shirt and multi-colored beads, a joyous Beatrice Yardolo greeted a small crowd outside the Chinese Ebola treatment center in the Paynesville suburb of Monrovia, where she was hospitalized for two weeks. Chinese healthcare workers took turns to congratulate her, offering a bouquet of red flowers, a toy panda and a survivor's certificate, as soldiers from the People's Liberation Army (PLA) looked on. "I am very grateful to the Chinese treatment center and the Almighty God that I lived to see this day. I did not know I would make it," said Yardolo, who comes from the St. Paul's Bridge suburb, which has since January been one of Liberia's last remaining hot spots. –Reuters