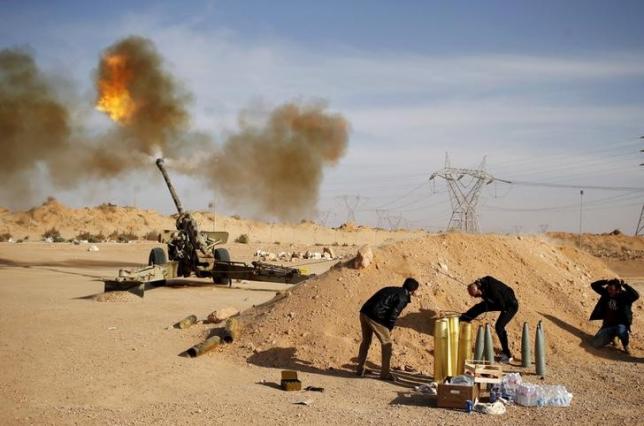 BENGHAZI, LIBYA - Libya's internationally recognized government has asked fellow Arab states to conduct air strikes against Islamic State in the coastal city of Sirte, a cabinet statement said on Saturday. In the past few days, Islamic State has crushed a revolt by a Salafist Muslim group and armed residents trying to break its grip on the city. Dozens of people have been killed, according to residents. The fighting typifies chaos in Libya, where two rival governments and parliaments, together with an assortment of Islamists, tribesmen and armed groups, are battling for control of cities and regions, four years after the ousting of veteran leader Muammar Gaddafi. "Libya's temporary government urges... the Arab brother states...to conduct air strikes against positions of the Daesh terrorist group in Sirte," a cabinet statement said. Daesh is an acronym for Islamic State, which has exploited a security vacuum to expand in Libya as it did in Syria and Iraq. The official government has been based in eastern Libya since losing control of the capital Tripoli a year ago to a rival group, which set up its own administration. Neither government has control of Sirte, Gaddafi's hometown. Both governments have conducted air strikes against Islamic State in Sirte in recent days but their capabilities are very limited, relying on outdated warplanes and helicopters from the Gaddafi era and lacking precision guns. It was not clear how Arab states would respond. An Arab coalition led by Saudi Arabia launched air strikes in Yemen in late March in an effort to stop the Iran-allied Houthi movement spreading across the country from the north. - REUTERS