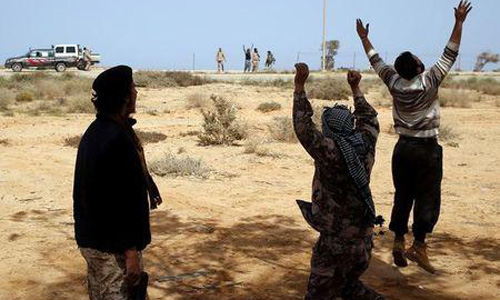 TRIPOLI – Libya's internationally recognised government conducted air strikes on a military camp on Saturday and attempted to hit the airport in Tripoli, the capital controlled by a rival administration, officials said. The attack came a day after the official government said it had launched a military offensive to "liberate" Tripoli, which has been seized by a group called Libya Dawn in August, reinstating a previous assembly. The recognised Prime Minister Abdullah al-Thinni and the elected parliament have been confined to eastern Libya since then but both administrations allied to armed factions fight for control four years after the ousting of Muammar Gaddafi. Saqer al-Joroushi, an eastern air force commander, said his aircraft hit the Mitiga airport in Tripoli and a camp used by Libya Dawn near another airport in the capital. A security source in Tripoli said the camp had apparently been hit while planes had missed the airport. Tripoli-based al-Nabaa television station said war planes had also hit the western Zuwara airport though there was no immediate confirmation for this. On Friday, UN Special Envoy Bernardino Leon said the military offensive threatened international efforts to reach agreement in the next few days on a unity government and lasting ceasefire. Western leaders say the UN talks are the only way to end the chaos in Libya where Islamist militants have gained ground. Both sides have attacked each other with war planes in the past few days. They face internal divisions and are dominated by former rebels who helped oust autocrat Muammar Gaddafi, but who now use their weapons to fight for territory. –Reuters