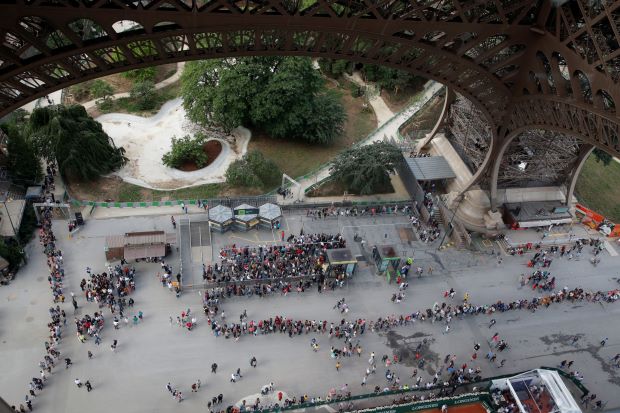 PARIS (Reuters) - A change in who gets to use the Eiffel Tower’s elevators has stranded frustrated tourists in long queues at the Paris landmark during a heatwave in the French capital.
Management of the 324-meter (1,063-foot) tower decided this month to dedicate one elevator for those who book tickets in advance and leave only one for those who turn up on the day, rather than both as before. Sightseers who arrive without tickets have had to join queues that snake all the way around the base of the monument. Some said they had waited for up to three hours, annoyed that few people were lining up for the other elevator. Temperatures in the city have hit 38 degrees Celsius (100 Fahrenheit), leaving sweltering adults and children desperate for bottled water in the queue. “It’s too long!” Burty Surette, 37, an electrician visiting from Mauritius said. “I was expecting the wait to be long but not this long. “There should be two elevators for people arriving without tickets. With the number of people that are coming to visit, one is not sufficient.” Pat Murphy, a 66-year-old retired automotive worker from Ohio, disliked the idea of having to book three months in advance for a particular day. “You don’t know if it’s going to rain,” he said. A spokeswoman for the Eiffel tower played down suggestions the new system had caused extra queues saying there always large numbers of visitors to the monument, particularly in summer. Workers at the tower have threatened to strike over what they call the “monstrous” new system. Negotiations are underway between the tower’s management and the CGT union, with a decision expected on Wednesday. “I can understand the workers saying this is insane - people are getting mad ...so I’d join them on strike,” said Murphy. More than 40 million tourists visited Paris last year, the highest on record, with over 6 million going up the Eiffel Tower, the most popular site in the city.