These solar power schemes, under a project, have been designed and installed by Research and Development Foundation (RDF) and funded by German child focused international organisation Kindernothilfe (KNH) and German Federal Ministry for Economic Cooperation and Development. The RDF has electrified 25 off-grid villages with solar power, 10 schools and 10 hospitals and 10 deep dug-wells in desert area in district Sanghar and Tharparker of Sindh.

While talking to students and teachers at Hathoongo, Dr Imran Ul Hassan said that district administration Sanghar always supports NGOs for their good work, and he said that he always facilitates NGOs in execution of the good work for communities. He said that solar energy in the schools would increase enrollment of girls also. It would enhance the quality of education in the government schools. He said that still there is need to give maximum facilities in schools as the children is our future. "The government is also doing its work for betterment of education in the area," he added. 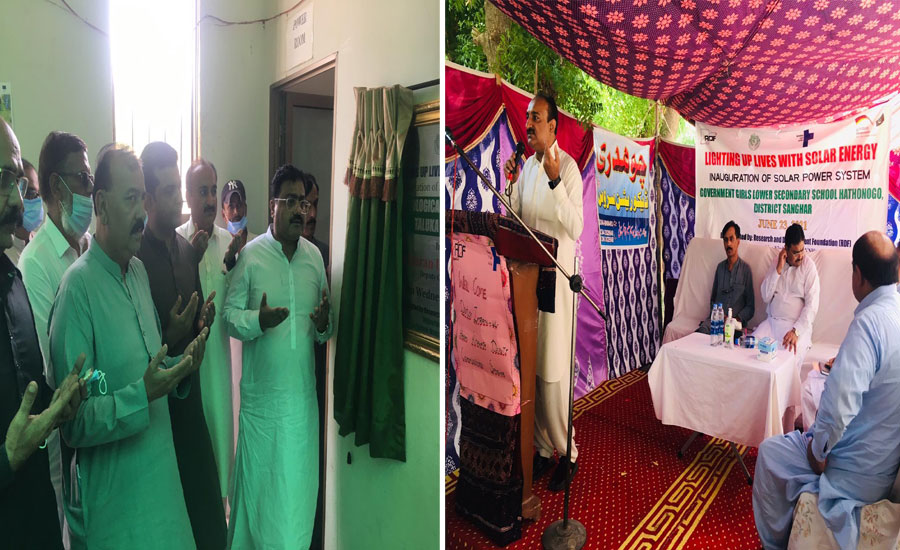 Sanghar District Education Officer Mr Naseer Jogi also spoke on the occasion, he said that RDF has selected need based schools in Khipro area for solarization and has extended assistance to the government to improve the schooling as well. He said that in today's age energy is one the fundamental need of the people. The project will have long lasting impacts on the lives of children, he added.

Executive Director RDF Mr Ashfaque Soomro while speaking to audience at Hathoongo and Civil Hospital Khipro said that electricity is a basic need of every citizen, but yet many rural areas are off-grid. Unavailability of this facility causes disruption in service delivery, drop-out of children from schools and health problems. He said that RDF has always tried to ease the life of the communities, particularly for women and children. Efforts for improving access to green energy should be maximized in the country to mitigate climate change, he further added.

Students and teachers of Hathoongo Town were very happy to have received solar energy, which has made the environment comfortable for learning and teaching at their school. He was accompanied by ADHO Sanghar Dr Ali Muhammad Junejo while inauguration of solar facilities at Khipro Hospital.

The inauguration ceremonies were attended by medical staff of Taluka Khipro, students, teachers and notables of the area.