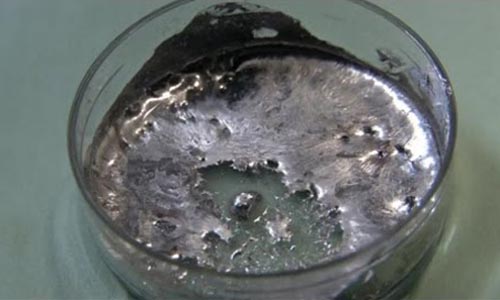 BEIJING, CHINA - It may look like nothing more than a small ball of metal, but the shape-shifting and self-propulsion abilities of a liquid metal alloy discovered by scientists at China's Tsinghua University has captured the imaginations of scientists and science-fiction fans across the world. Professor Liu Jing and his team have created what they believe could prove the first step toward developing a robot similar to the infamous T-1000 shape-shifting, liquid metal assassin from the Terminator movies. The device is made from a drop of metal alloy consisting mostly of gallium, which is a liquid at just under 30 degrees Celsius. Last year they discovered that an applied electrical current causes the gallium alloy to drastically alter its shape. Changing the voltage applied to the metal allowed it to 'shape-shift' into different formations. When the current was switched off, the metal returned to its original drop shape. But the team made their biggest breakthrough when they realized that bringing it into contact with a flake of aluminum caused a reaction creating hydrogen bubbles that allowed it to move of its own accord. Liu said it was able to 'fuel' itself for about an hour. "The machine has two processes. One is to create gases like hydrogen. Part of these gases form the propulsion. There's also something important, in fact very important, which is the electricity generated behind the alloy. So this galvanic battery creates an internal electrical power, and this type of electricity will very easily lead to stretching of the surface of the liquid metal in an asymmetrical pattern, and this pattern leads to rotations inside the liquid metal, and the process of these rotations will set the liquid metal in motion in a certain direction," he said. While the scientists are still learning more about the properties of the metal, Liu believes it could have a variety of medical applications, for example delivering medicine in blood vessels. "At present it has potential to become a robot, but a robot for the veins. So apart from a robot for the veins it could for example [be used in] people's windpipes and digestive system, it may perhaps be able to carry out some medical tasks, for example transporting some medicines," he said, adding that scientists would of course first have to ensure that there would be no side-effects to ingesting the metal. As for comparisons to the deadly machine in the Terminator movies, Liu said that while the thought of his discovery bearing resemblance to the T-1000 did make him chuckle, he hoped that his robot would work for the good of mankind. "Perhaps people think it's like the Terminator but I think to a certain extent the Terminator's not very good, he wasn't good for mankind. So we hope that if in the future we can really make a soft robot, we hope that it can be a more human-like robot," he said. - Reuters