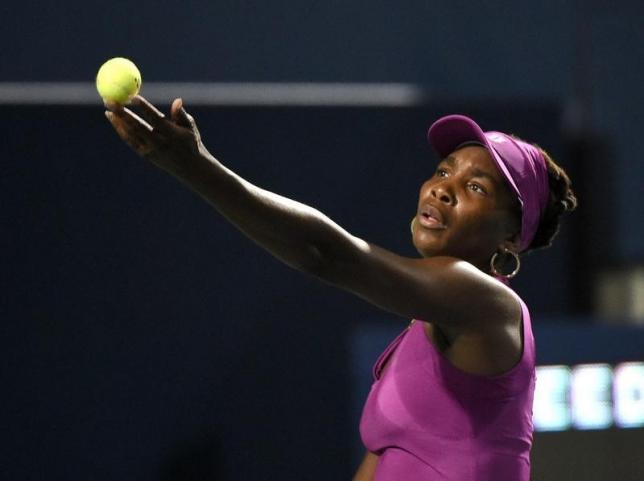 TORONTO - After a long rain delay Germany's Sabine Lisicki made quick work of Venus Williams, strolling into the second round of the Rogers Cup on Monday after routing the American 6-0 6-3. Rain wiped out most of the opening day action but play finally resumed on the Toronto hardcourts late in the evening following a nine-hour wait with Williams and Lisicki walking out onto a near empty centre court. For those who waited out the storm, the reward was brief as Lisicki needed just 66 minutes to dismiss the 14th seed. "It's always tough after a long rain delay, you don't know if you are ever going to get onto the court and with a tough match against Venus," said Lisicki. "It's always a pleasure to play her because you know you have to play well to beat her, so I'm really happy with my performance today." Lisicki, who got her North American hard-court campaign off to a shaky start with a first-round loss last week at Stanford, came out looking sharper and ready to play, opening the match with a break. Williams, trailing 3-0, had a chance to break back but could not convert as Lisicki held to forge further ahead. Williams' resistance continued to crumble, with three straight double faults in the fifth game handing her opponent a third break, before Lisicki closed out the set 40-0. Williams, playing just her second match since a fourth-round loss to sister Serena at Wimbledon, held serve to open the second set but then double faulted to gift Lisicki a 2-1 lead. Williams later saved two match points but could not fight off a third as Lisicki improved her record to 4-1 against the American. The match was only the second singles contest to be completed on a soggy opening day. In the first match of the day on centre court, Italian 15th seed Flavia Pennetta beat Canadian wild card Gabriela Dabrowski 6-4 6-1 to set up a second round encounter with world number one Serena Williams. A former doubles world number one, Pennetta needed just 69 minutes to dismiss the 222nd ranked Dabrowski and register her first match win since the French Open. "It's going to be nice because I'll play one of the best players ever," said Pennetta. "But it's good because she's the hardest test and I'll see where my game is." - Reuters