Liverpool back in Champions League hunt with Newcastle win 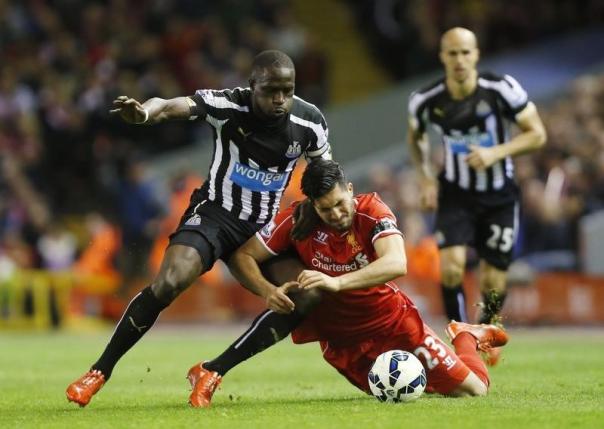 Liverpool back in Champions League hunt with Newcastle win

LIVERPOOL - Liverpool kept alive their hopes of Champions League football next season with a comfortable 2-0 Premier League victory on Monday against a Newcastle United side who finished with 10 men. A goal in each half from Raheem Sterling and Joe Allen respectively secured victory and closed the gap on fourth-placed Manchester City to four points with six games remaining. When Liverpool and Newcastle meet goals are normally the order of the day with 130 scored in their previous 41 league meetings without a single goalless draw in that time. Sterling ensured that run continued when he netted after nine minutes to give Liverpool the perfect start following back-to-back league defeats by Manchester United and Arsenal. Allen doubled Liverpool's lead in the 70th as Newcastle, who had Moussa Sissoko sent off for a second booking late on, were condemned to a fifth straight league defeat. Fifth-placed Liverpool now have 57 points from 32 games, one point ahead of Southampton in sixth, and are closing in on ailing City who lost 4-2 at local rivals Manchester United on Sunday, while struggling Newcastle remain 13th with 35 points. "Manchester City have maybe opened up the door a wee bit and if we keep winning our games we will see what will happen but I am sure that there will be plenty of twists and turns to come still," said Liverpool manager Brendan Rodgers. RENEWED HOPE Liverpool, who play Aston Villa in an FA Cup semi-final at Wembley on Sunday, arrived at Anfield in desperate need of a win to close the gap on Manchester City and give themselves renewed hope of qualifying for the Champions League. Sterling, making his first Anfield appearance since a BBC interview about his decision to wait on signing a new contract, gave the hosts the perfect start when he weaved his way into the box and curled an exquisite shot past goalkeeper Tim Krul. Newcastle spent most of the first period on the back foot but they finished it strongly and felt they should have won a penalty when Ayoze Perez was wiped out in the box after a wild swing of the boot from defender Dejan Lovren. Sterling missed a glorious chance to double his tally at the start of the second half when he scuffed Henderson's cross wide from point-blank range but Allen made amends for the England forward's miss when he lashed the ball home from close range. Newcastle were then reduced to 10 men when midfielder Sissoko received a second yellow card for a mistimed tackle on Lucas as John Carver’s side fell to yet another defeat leaving them in danger of being dragged into a relegation battle. - Reuters