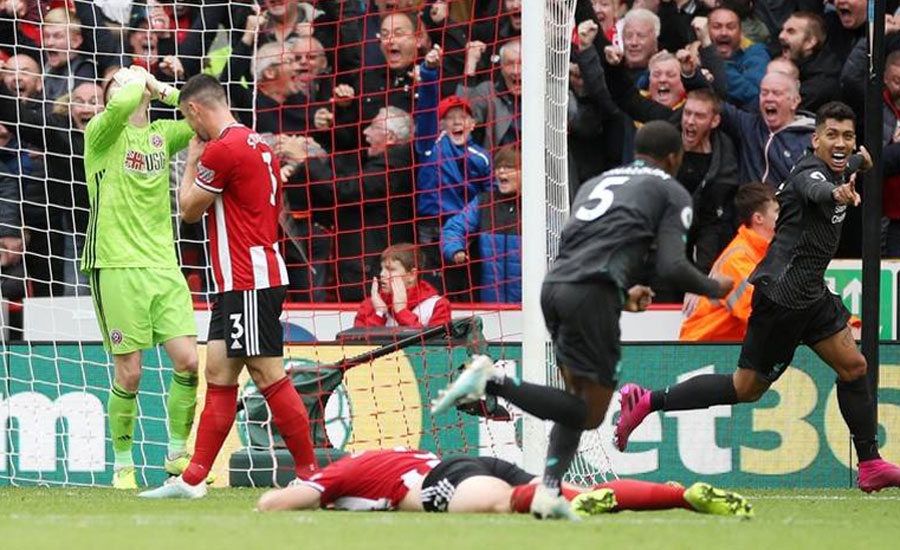 LONDON (Reuters) - There was more than a touch of fortune about Liverpool’s seventh successive Premier League win of the season as a howler by Sheffield United goalkeeper Dean Henderson gifted the leaders a 1-0 win at Bramall Lane. But Pep Guardiola’s Manchester City kept themselves within five points of Liverpool after picking up a 3-1 win at Everton while Tottenham Hotspur and Chelsea both won at home. Liverpool manager Juergen Klopp acknowledged that luck was on their side when Henderson allowed Georginio Wijnaldum’s shot from the edge of the area to squeeze through his arms and between his legs at a critical point in the second half. “One team deserved to win, which was us, but all respect to Sheffield United, they were tough,” said Klopp. For the Blades, the challenge was always to hold on to their concentration for the entire 90 minutes against the European champions who have confidence coursing through their veins. Liverpool, who have now won 16 league games in succession across two seasons, need one more victory to equal their best start to a Premier League season in 1990 and two to match Chelsea’s 2005-06 record. City had to work hard at Goodison Park against an Everton side that had eight shots on target but came up against inspired goalkeeping from Brazilian Ederson. Brazilian Jesus stooped at the back post to head in a Kevin De Bruyne cross to put the champions ahead in the 24th minute. A determined Everton got back on level terms, though, nine minutes later, when after poor clearance from Fernandinho, Seamus Coleman lofted the ball goalwards and Dominic Calvert-Lewin dived to make sure with a header on the line. There were chances for both teams before City got back in front with a low free kick into the far corner from Mahrez after Yerry Mina had brought down De Bruyne. Sterling made sure of the three points, blasting home off the underside of the bar after a low cross from substitute Sergio Aguero was deflected out off the foot of Everton keeper Jordan Pickford. Spurs keeper Hugo Lloris was guilty of an even worse error than Henderson against Southampton but they still emerged 2-1 winners after Harry Kane scored his eighth goal in six league games against the Saints.

Frenchman Lloris dwelt too long on the ball, allowing Danny Ings to charge in and bundle it over to cancel out Tanguy Ndombele’s opener. That was Spurs’ second mistake of the day after full back Serge Aurier was sent off for two bookings in four minutes, but Kane still made the difference — as he often does. Tottenham, who moved up to fourth, stayed ahead of Chelsea on goal difference after Frank Lampard’s side recorded a routine 2-0 win over Brighton & Hove Albion with a Jorginho penalty and strike from Willian at Stamford Bridge. Seventh-placed Bournemouth are also on 11 points after a 2-2 draw with visitors West Ham United, who are third on 12, in a game featuring two VAR interventions involving Nathan Ake. VAR also cancelled out John McGinn’s effort for Aston Villa against Burnley but the Scot managed to score in a thrilling 2-2 draw where goals from Jay Rodriguez and Chris Wood enabled the visitors to twice come from behind. Crystal Palace’s Luka Milivojevic and Andros Townsend struck either side of halftime for a deserved 2-0 home win over Norwich City while Watford’s nightmare season continued with a 2-0 defeat at Wolves. While the result represented a big improvement on last week’s 8-0 rout by Manchester City, Watford remain rooted to the bottom on two points while Wolves’ first league win of the campaign moved them up to 13th.