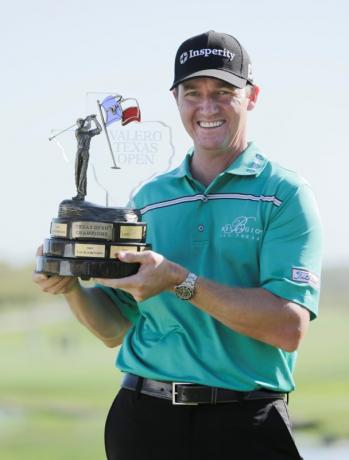 SAN ANTONIO - Hometown favourite Jimmy Walker became the first multiple winner on the PGA Tour this season by claiming a four-stroke victory over Jordan Spieth in the Texas Open at TPC San Antonio on Sunday. Walker, who stormed to a nine-shot win at the Sony Open in Hawaii in January, began the day with a four-shot lead and was never seriously threatened as the San Antonio area resident shot a two-under 70 for an 11-under-par 277 total. "It’s at home and it’s cool and you can feel the support," Walker, 36, said. "It doesn’t happen very often to win in your hometown." Spieth, who struggled on the front nine with three bogeys, put on a late charge to whittle Walker's seven-shot lead down to four. Texan Spieth, who won his last tour start two weeks ago at the Valspar Championship, made four birdies in a row from the 14th but Walker held off Spieth's charge with birdies of his own at 16 and 17 to retain his lead. FedExCup champion Billy Horschel finished third at 284 after a final-round 71. "It plays hard, sometimes it’s hard to make pars," Walker said of the fast-running, wind-blown TPC San Antonio, which played to an average of two-over 74 on Sunday. "I felt like I was leaking a little oil there, wasn’t putting very good, and I finally smoothed out the putting stroke a little bit and started making some." Despite his big lead, Walker admitted that playing partner Spieth was hard to ignore. "But Jordan, holy cow. I’m going to have nightmares about that guy," said Walker. The decisive victory underlined another strong start to the season for the late-blooming Walker, who also began the 2013-2014 campaign as the tour's first multiple winner. Walker won his first three PGA Tour events in eight starts last season, becoming just the fourth player in 20 years to win three times in eight or fewer starts, joining Tiger Woods, Phil Mickelson and David Duval. The American, who finished in the top 10 in three of last year's four majors including a tie for eighth at the Masters, said he would be spending Monday and Tuesday at Augusta National to prepare before heading to the Houston Open. "I’m excited to go," said Walker. "I've been looking forward to it. "All this just keeps adding momentum and confidence." - Reuters