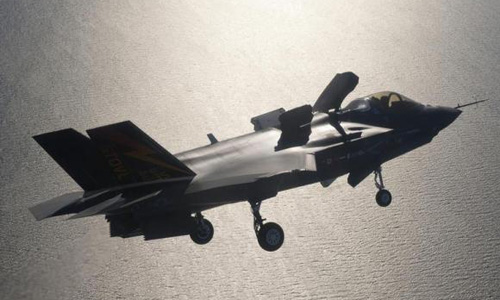 WASHINGTON - Lockheed Martin Corp is likely to lose some incentive fees due to delays in final delivery of the 2B software it is developing for the F-35 fighter jet, the Air Force general who runs the $391 billion program told reporters on Tuesday. Lieutenant General Chris Bodgan said software testing in December revealed problems with the ability of the jets to fuse data about threats on the ground when four F-35s were flying at once. But the Marine Corps still planned to declare its F-35 B-model jets ready for initial combat use in July, he said. The issue was being corrected and tested, he said, but the final version of the software would not be ready until early fall, instead of June, as planned. As a result, Lockheed would likely forfeit some of the $300 million in incentive fees linked to completion of three separate software packages - 2B, 3I and 3F - for the jet, he said. "They get none of it if they don't finish 2B, 3I and 3F with full capability, on time," he said, forecasting a four- to five-month delay in the final 2B software. Lockheed spokesman Michael Rein said the 2B fee was only part of the available software award fee, and the amount would be determined once the final 2B software was delivered. Bogdan said the Marine Corps was proceeding with the current version of the 2B software version, and would modify its use of the jets to account for the deficiencies. For instance, the fusion issue did not occur when two jets shared data, which meant the Marines could fly two sets of two jets, instead of combining them into a four-jet set, he said. Bogdan said the current version of the software was safe for pilots to fly and the program office could have fixed the issue as part of the 3I software effort, but was pressing ahead now to avoid future delays. He said the program was also closely monitoring work on a computer-based logistics system, bulkhead issues with the B-model, and efforts to make the planes more reliable. He said the overall program was doing well, with costs slowing coming down and major milestones on schedule. Bogdan said some foreign countries slated to buy the F-35 jets in coming years hoped to drive down production costs even further by buying several years' worth of jets at a time, beginning with the 11th batch of jets. - REUTERS