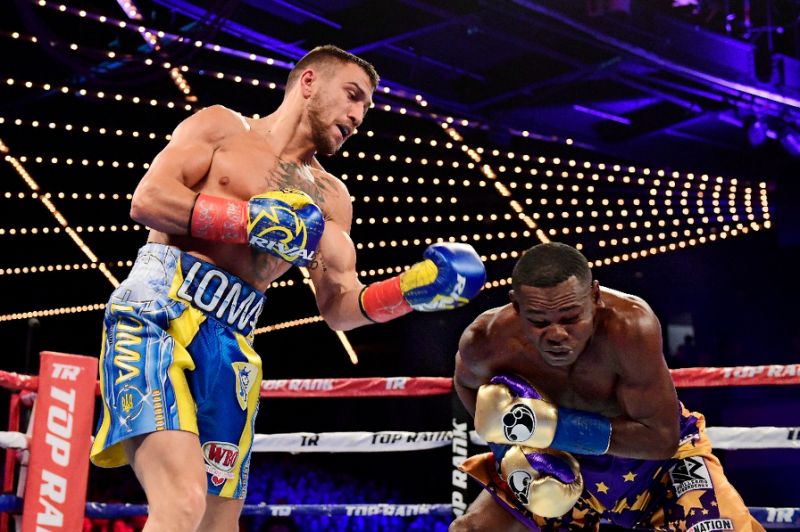 The 29-year-old Lomachenko was awarded the victory when Rigondeaux elected not to come out for the seventh round in the first world title professional showdown between two multiple Olympic gold medal winners.

"Maybe I should change my second name, now my name is 'No Mas Chenko'," Lomachenko joked in the ring, referring to Roberto Duran when he threw in the towel against Sugar Ray Leonard in 1980.

Lomachenko improved to 10-1 as he handed the Cuban defector the first loss of his career in front of a crowd of 5,100 at the Madison Square Garden Theater.

Lomachenko humiliated Rigondeaux, using his size and hand speed to dominate every round except the first.

Rigondeaux, who was booed loudly after the fight, looked the much smaller of the two fighters as the 37-year-old moved up two weight classes to challenge for the title.

Rigondeaux (17-1) said after the fight that he hurt his hand in the second round and that was the reason he couldn't go on.

"I lost, but it was because of my hand," he said. "In the second round I injured the top of my hand and I could no longer continue."

Lomachenko, who won gold in the 2008 and 2012 Olympics, has rocketed to the top of his weight class since turning pro in 2013, winning nine world championship fights in his first 11 contests.

Lomachenko lost his second pro fight to veteran Orlando Salido but then won a world title in his next bout by beating Gary Russell. He became a two division champion by moving up in weight in just his seventh fight to beat Roman Martinez.

"He is a technical fighter. Very quick and very explosive," Rigondeaux said of Lomachenko.

A product of Cuba's storied amateur program, Rigondeaux won more than 450 amateur fights and is a two-time Olympic champion, having won gold in 2000 and 2004.

Since turning pro in 2009, his biggest fight before Saturday was a dismantling of Nonito Donaire in 2013.

His last fight, against Moises Flores, was ruled a no contest after he inadvertently landed a fight-ending punch after the bell.