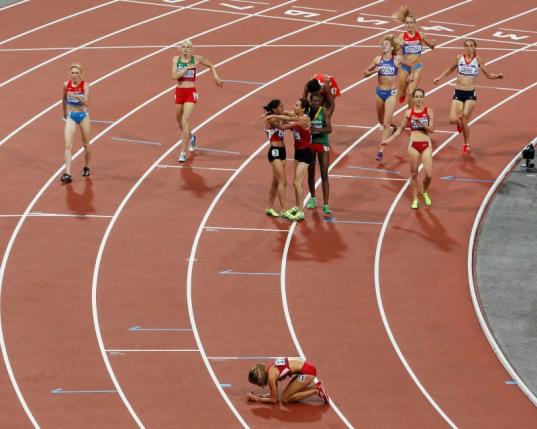 LONDON - The Ben Johnson 1988 Olympic 100 meters final was dubbed "the dirtiest race in history" but there is a new contender for that dubious honor as the fallout continues from the drug-ravaged 2012 women's 1500 meters in London. Four of the first five in the memorable Seoul showdown tested positive for banned drugs at some point in their career but no less than six of the top nine in the London 1500, including the gold and silver medallists, have served bans before or since. Turkey's muscular powerhouse Asli Cakir Alptekin, who had already served a two-year doping suspension, crossed the line first but had the victory annulled and is serving an eight-year ban after irregularities were found in her biological passport. Compatriot Gamze Bulut, who had improved her personal best by an eyebrow-raising 18 seconds in the previous year, finished second but was also later banned for abnormal blood levels. Russia's Tatyana Tomashova, who had served a two-year ban up to 2010 for switching urine during a test, finished fourth. Fifth-placed Ethiopia-born Swede and 2013 world champion Abeba Aregawi tested positive for meldonium in January this year, although had her ban was lifted in July due to a lack of clarity over the drug's properties. Russian Ekaterina Kostetskaya (seventh) and Belarussian Natallia Kareiva (ninth), have been subsequently banned, as were two other athletes from the heats. Briton Lisa Dobriskey finished 10th in the final and famously said afterwards: "I'll probably get into trouble for saying this but I don't believe I'm competing on a level playing field." Dobriskey said she had raised her concerns with the International Association of Athletics Federations (IAAF) earlier in the season when Cakir Alptekin was posting times faster than in the period when she had previously been doping. Without proof, nothing could be done. "HUMILIATED" The Briton had every right to be frustrated having been cheated out of a medal at the Beijing Olympics when she was pipped for bronze by Ukrainian Nataliya Tobias, who later tested positive for testosterone. "After the (2012) race I wanted to cry," Dobriskey said recently. "It should have been a joyous moment in front of my home crowd but I felt humiliated. I felt I had to apologise for my performance to my family and friends. "The most upsetting thing is that I just felt our sport had moved on so much more from 1988. It should be harder to cheat than back then but that doesn't seem to be the case." American Shannon Rowbury finished sixth in London and went through the same emotional mix of anger and frustration as Dobriskey. "While those women were doing their victory lap I was sobbing, trying to get enough control to face my family," she said in a recent video blog. Almost four years on, despite the bans, the International Olympic Committee (IOC) still lists the same race finishing order and has done nothing about reallocating the medals. Clean athletes in the race, meanwhile, have had to pick up information from social media, something Rowbury said just added to the pain. "As an athlete whose life and livelihood has been negatively effected by drug cheats, I would ask for establishing a better protocol," she told Reuters in an email. "I did receive a message from (IAAF President) Seb Coe, which I very much appreciate. He explained some of the complications and said he hoped to work towards a more timely information process." Rowbury said she would like to see a re-awarding protocol "that helps the athlete to regain a small piece of what was robbed from them". Her desire is for somebody inheriting a medal, for example, to be awarded it at the next Olympics rather than receiving it in a brown envelope. Rowbury will at least get another chance to make up for her disappointment in Rio, having qualified for her third Olympics. Dobriskey, though, after a wretched time with injuries, is set to head into retirement forever wondering. -Reuters