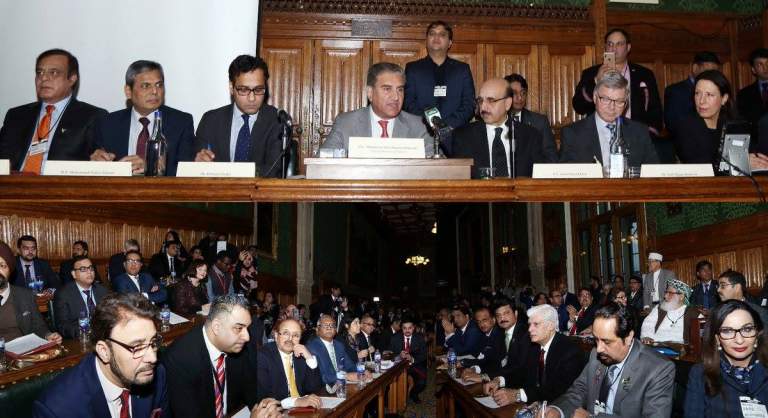 LONDON (92 News) – An international conference in London unanimously passed a resolution to express solidarity with Kashmiris. The resolution presented by Lord Qurban Hussain at International Kashmir Conference in UK Parliament committee’s room. The resolution condemned the atrocities committed by Indian forces on Kashmiris. The forum demanded world bodies to stop human rights violations in the occupied territory. It also extended support to Kashmiris in their just struggle. 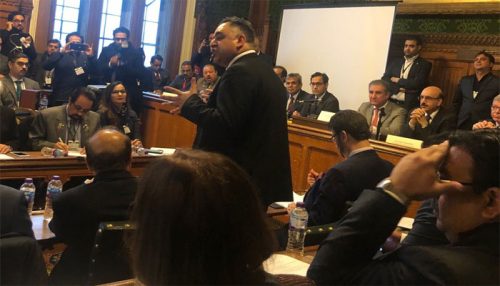 All the Pakistani and British dignitaries present on this occasion unanimously passed the resolution. On the occasion, Miniter for Foreign Affairs Shah Mehmood Qureshi said that India always pronounced Kashmir as the bilateral issue but did not come on the table of negotiation. The minister further vowed to continue political, moral and social support for Kashmir. Meanwhile, Senator Asif Karmani, Sherry Rehman and Mushahid Hussain said that the blood of Kasmiri people will not be wasted, adding the Kashmiri will get freedom. However, Senator Nuzhat Sadiq highlighted the need for the world to know about Indian terrorism. Addressing the conference, Member of the British House of Lords, Sayeeda Warsi said, sexual violence in occupied Kashmir as a tool of war is most horrific and India is failing to fulfill its responsibility. Labour MP and shadow British Foreign Minister Debbie Abrahams said, we need to wake up international community to take interest in the issue of Kashmir and their right of self determination. He said India is a member of commonwealth and by its rule should respect human rights. Liberal Democrat MP Tom Brake said there is a special role for the UK government in terms of the historic role that it has to play for resolving the Kashmir dispute. Labour MP Sharron Debbie said Kashmir has become a horror story but peace can never be achieved by violent means. EX Prime Minister of Norway Kjell Magne Bondevick said Kashmir is the longest lasting conflict where people are suffering and huge abuses have created refugee problem. “I visited Kashmir and was horrified to see the humanitarian situation.”