London fashions a show in memory of designer Alexander McQueen 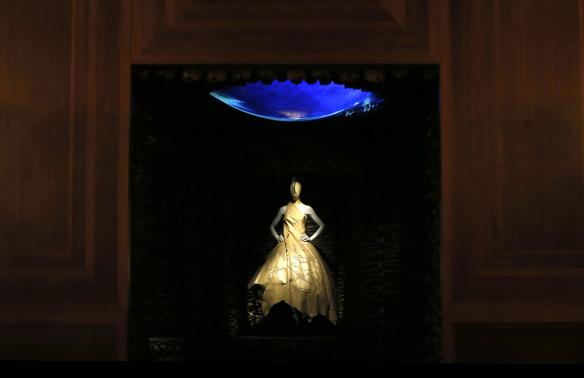 London fashions a show in memory of designer Alexander McQueen

LONDON - A butterfly headdress, feathered gowns and garments crafted from horns, hair and seashells went on display in London this week in a exhibition celebrating the work of the late British fashion designer Alexander McQueen.

McQueen was famous for his daring creations and avant-garde fashion shows which drew upon themes of nature, history, romance and tragedy.

Trained as apprentice on London's Savile Row, the designer rose from an east end London boyhood to become of the world's leading talents in fashion before he took his own life five years ago.

More than 240 pieces of McQueen's work feature in the exhibition at London's Victoria and Albert Museum, including dresses made from feathers and hand painted glass, as well as intricately embroidered kimonos and lace-covered antlers.

It was the designer's attention to detail that stood out for curator Claire Wilcox, who helped bring the show to London.

"McQueen's collections were so enthralling and yet at the same time each garment was so beautifully crafted -- so you have this extreme attention to detail, fastidious tailoring, beautiful embellishments and incorporation of all sorts of different materials," she told Reuters.

Divided into 10 different rooms, the exhibition takes visitors on a journey through the designer's work, including videos of his shows and special pieces from his archive.

In one room, the Cabinet of Curiosities, 120 garments and accessories can be seen, including his signature "Armadillo" shoes, a number of headdresses by his friend and collaborator Philip Treacy and a white strapless gown that was spray-painted by robots in one of his iconic shows.

The exhibition, which was originally shown at the Metropolitan Museum of Art in New York, is a homecoming for the designer whose earlier work was heavily influenced heavily by London where he grew up and based his label.

McQueen was known for his ability to shock and his autumn/winter 1995 collection "Highland Rape" which featured disheveled looking models in torn clothing was considered a classic example.

"He did court controversy and he wanted to get people's attention with his shows," said Wilcox.

"There is no doubt that was an element of fearless, the bravado, the East End boy -- all of these elements but I think people are just struck with admiration for his creativity ... and his artistry," she added. - Reuters