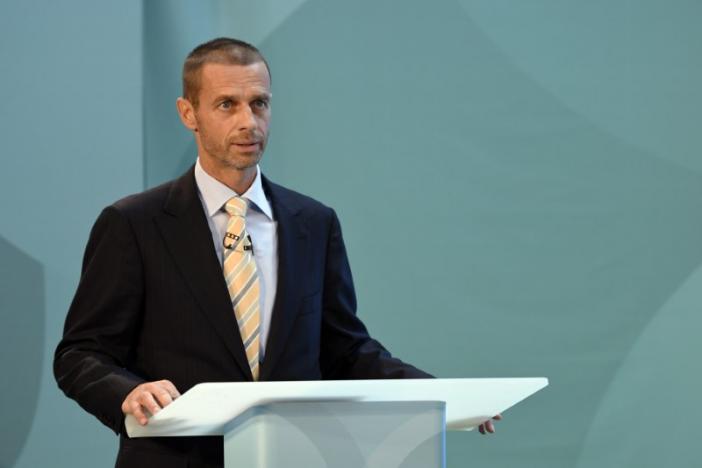 LONDON - New UEFA president Aleksander Ceferin believes London is the perfect choice to stage the climax to Euro 2020 after 12 other cities across the continent host earlier matches, he said. Under the controversial format being used for the tournament's 60th anniversary, those cities will stage four games each with the semi-finals and final at Wembley in the English capital. Before being elected last week, Ceferin had said the plan was a risk and would be difficult for travelling fans. In his first official engagement since the election, at the launch of the London logo in a ceremony that will be replicated in the other host cities, the Slovenian lawyer suggested the format would be for one tournament only. "I'm delighted to be in England, the home of football, the country that gave football to the world," Ceferin told an audience including delegates from all 13 hosting football associations and England manager Sam Allardyce. "The tournament will be unique and memorable in a variety of ways. England hosted the 1996 European Championship. “Twenty four years after Euro 96, football will once again return to its mythical cradle," Ceferin said. "London is a wonderful, vibrant multicultural city and an intense hotbed of football." Ceferin said UEFA had a vision of commemorating the 60th anniversary of the European Championship in a true celebration of the game "we all love and cherish". "What better way could there be than to take the final tournament for one single occasion to all four corners of our continent?," he added. The 12 group venues are Amsterdam, Baku, Bilbao, Brussels, Bucharest, Budapest, Copenhagen, Dublin, Glasgow, Munich, Rome and St Petersburg. "Eight of the 13 host cities will be celebrating something they have never done before and might never have dreamed of doing," Ceferin added. London Mayor Sadiq Khan said his city, which also staged the 2012 Olympic Games, was "renowned as one of the world's best hosts for major sporting events", adding that it had a fan base from almost every nation on earth. In a reference to England's failure at the 2016 tournament, when they suffered an ignominious defeat by outsiders Iceland in the last 16, he added: "We'll keep our fingers crossed that Iceland's players are not as inspired this time." -Reuters