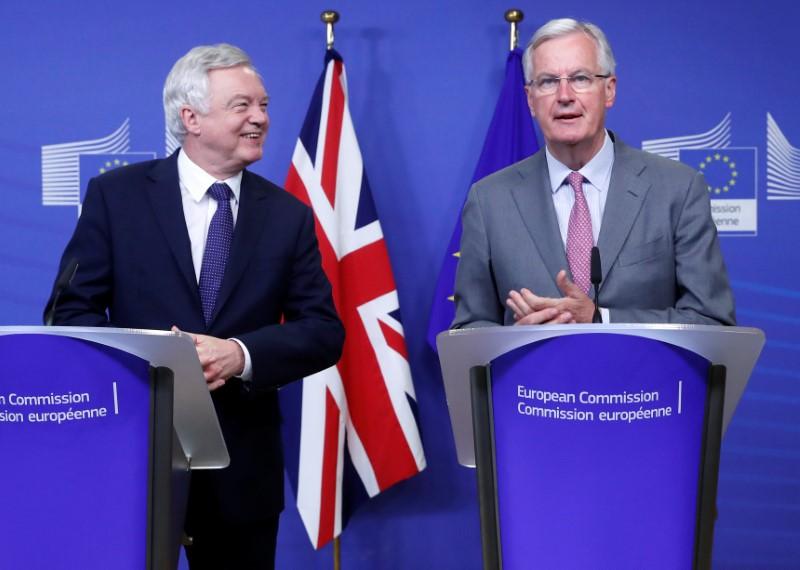 BRUSSELS (Reuters) - Britain's Brexit minister vowed to "get down to work" as he kicked off a first full round of negotiations on Monday, but a year after Britons voted narrowly to quit the EU their government still seemed at odds over what it wants.

"It's time to get down to work and make this a successful negotiation," veteran anti-EU campaigner David Davis said as he was welcomed to the European Commission by the European Union's chief negotiator Michel Barnier for four days of talks.

But back in London, British media were rife with talk of infighting that echoed the divisions Prime Minister Theresa May's Conservative party suffered during the EU referendum. Foreign Secretary Boris Johnson, attending a different meeting in Brussels, passed up an opportunity to deny that was the case.

His backing was seen as vital for the 52-48 percent victory of the Leave camp in June last year. Asked point blank on Monday if the cabinet was "split on Brexit", Johnson simply said he was pleased negotiations had begun and then defended the offer May has made to protect the rights of EU citizens in Britain.

Struggling for authority after losing her majority last month in an election she did not need to call, May faces questions inside her party on whether she can exercise control. That is worrying EU negotiators, who stress that 20 months until Brexit is very little time to negotiate an orderly divorce.

Finance minister Philip Hammond, who like May campaigned last year to keep Britain in the EU, said on Sunday he believed most of his cabinet colleagues now backed the idea of having two years or more of a transition period after Brexit in March 2019 - to soften the disruptive effect on society and the economy.

That had not been the case a month ago, Hammond said. That was a reminder of a gulf in perceptions across the Channel where EU leaders have assumed from the outset that Britain would need more than the two years allowed by treaty to negotiate the deal it wants to retain close, open trading links with the continent.

Hammond accused unnamed colleagues of briefing against him to try to undermine what is seen as his push for a "soft Brexit" that would prioritize trade rather than hardliners' demands for controls on EU immigration or an end to EU legal oversight.

Trade minister Liam Fox, who favors a cleaner break with the EU, said on Sunday he could live with a transition - during which it is likely Britain would keep paying a share of the EU budget and follow EU rules - as long as it was kept short. That is also the view in much of the EU, where leaders do not want to see Britain given an indefinite half-in, half-out status.

Divisions over such basic issues of the Brexit negotiations could raise the risk again of a failure to reach a deal. That would see huge uncertainty for businesses and millions of people across Europe as Britain would simply be out of the bloc on March 30, 2019 with no clear rules on what that should mean.

London and Brussels have taken initial negotiating positions saying they are ready for such an outcome. But most officials in Brussels believe Britain, for one, must be bluffing, since the legal limbo into which it would be pitched would be so damaging.

However, Gus O'Donnell, Britain's former top civil servant, said the chances of a smooth Brexit were at risk. "It appears that cabinet members haven't yet finished negotiating with each other, never mind the EU," he said.

British businesses are anxious to see a coherent approach in May's government to indicate early on how a transition would work and how long it would run to help them make investment decisions.

A weekend of media briefings from competing factions within the Conservatives did little to reassure companies, though most cabinet ministers appear now to accept that there needs to be what May calls an "implementation phase".

Barnier told reporters: "We will now delve into the heart of the matter. We need to examine and compare our respective positions in order to make good progress."

Both men declined further comment. Barnier said they would brief the media on Thursday after the first round wraps up.

Working groups will focus on three issues: citizens' rights; the EU demand that Britain pay some 60 billion euros ($69 billion) to cover ongoing EU budget commitments; and other loose ends. Barnier has dismissed the British rights offer as falling short of the EU demand that its 3 million citizens there keep all their existing rights for life and have recourse to the EU courts to enforce those rights even after Britain has left.

A fourth set of talks, run by Davis and Barnier's deputies Oliver Robbins and Sabine Weyand, will focus on curbing problems in Northern Ireland once a new EU land border separates the British province from EU member Ireland to the south. Some of that will have to wait for clarity on future trade relations. –Reuters