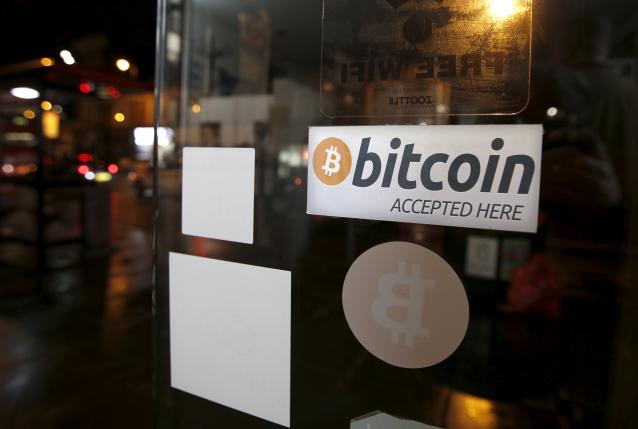 LONDON - London, center of the $5-trillion-a-day global currency market, now wants to be home to a controversial upstart - bitcoin. British authorities have come out in support of digital currencies in the name of promoting financial innovation, while proposing that regulations should be drawn up to prevent their use in crime. But it is technophiles who are leading the drive to make London a real-world hub for trade in web-based "cryptocurrencies", of which bitcoin is the original and still most popular. Every Tuesday evening in a trendy cafe in London's Shoreditch neighborhood, a group of digital currency enthusiasts gathers to discuss ideas, "vape" from e-cigarettes and exchange their pounds for bitcoins in a dedicated "ATM". With more than 2,200 members, CoinScrum, run by a former derivatives trader who left the world of traditional finance to work on a digital currency start-up, is the biggest bitcoin networking group in the world. Its meetings draw a mostly young, mostly male crowd - some amateurs, others who have come to Britain to start bitcoin businesses. Already the capital of traditional currency trading, London is competing with San Francisco's web expertise and New York's financial clout as it pushes to be the foremost financial technology - or fintech - center in the world. Last month the British government announced plans to regulate digital currency exchanges to prevent their use in money-laundering, and to help to develop a set of standards for cryptocurrencies. Backers of bitcoin praised this for lending legitimacy to the currency - which unlike traditional money has no printed form and remains outside the control of central banks - without stifling innovation. "London has been the home of financial innovation for hundreds of years," said Nicolas Cary, co-founder of Blockchain, which provides bitcoin data and "wallet" software for storing the currency. "It would be a historical mistake not to make this the home of digital currencies. There's an incredible amount of talent and experience here." Just over 14 million bitcoins are in circulation, worth around $3.1 billion at the current exchange rate of around $220 each. Bitcoin brought 29-year-old Cary to Britain two years ago from Denver, Colorado. He joined forces with Ben Reeves, then a 22-year-old computer science graduate, to develop the Blockchain wallet, spending the first year working out of a two-bedroom apartment in northern England. Now Blockchain, named after the technology behind bitcoin, is the world's biggest wallet provider, with over 3 million users. Last year it raised over $30 million in its first round of funding, including from billionaire Richard Branson. POSITIVE ATTITUDE While some people argue that London lags New York overall as the center for traditional finance, many say the latter's attitude to digital currencies - including a state plan to impose a "BitLicense" on bitcoin start-ups - makes London more attractive for the growing number of businesses dealing in the budding technology. "What we see in the UK ... is a different attitude," said Jerry Brito, executive director of Coin Center, a Washington DC-based non-profit advocacy group for digital currencies. "It's a very positive attitude, one of: this is an amazing innovation, we're going to have to have some kind of regulation in terms of money laundering, but let's do this in a constructive way, in partnership with the technologists and the industry." Detractors worry that digital currencies make it easy for users to buy products anonymously from websites like Silk Road, an underground marketplace for drugs and other illegal goods which was shut down in 2013. But advocates argue that using cash for illicit trades is easier and less traceable, pointing out that most U.S. banknotes are contaminated with cocaine. Asked about bitcoin, the governing body for the City of London financial district said authorities needed to be "alive to the potential risks and take strong action if they find evidence of abuse or criminal activities". But the employment and growth opportunities offered by the fintech in general were to be welcomed, it said. Britain made bitcoin trading exempt from value-added tax last year. Other countries have yet to decide how to tax bitcoin, since its independence from any central bank means it does not fall into the traditional definition of money. However, Australia has made bitcoin transactions subject to goods and services tax. That helped to drive CoinJar, an Australian company that allows users to buy, sell and spend bitcoins, to move its headquarters to London last December. INVESTMENT Later this month Swiss banking giant UBS will open a technology lab in London to explore the wider application of the technology in the financial services industry. Finance minister George Osborne has said he wants Britain to lead the world in developing fintech, highlighting the potential of digital currencies. Last year investment in fintech firms in Britain and Ireland more than doubled compared with 2013, to $623 million, representing 42 percent of such investment in Europe, according to consultancy Accenture. Alongside the new regulation and standards, the British government promised an additional 10 million pounds ($15 million) for a research initiative that will look into the blockchain technology behind digital currencies. It is the blockchain - essentially a ledger of every bitcoin transaction that is virtually impossible to tamper with - that the Bank of England has also said could be revolutionary. Central banks, it has said, could eventually issue digital currencies of their own. Dozens of others have copied this technology to set up their own digital currencies, though none has so far managed to knock bitcoin off the top spot. TANTRIC MASSAGE Londoners can change cash for bitcoins at seven ATMs in the capital, and use them to pay for anything from tantric massage to a designer dress, a pork chop to a pint of beer. One company even allows rent on property to be paid in bitcoin. Back in the trendy "Vape Lab" e-cigarette cafe, one young bitcoiner was putting 800 pounds' worth of 20 pound notes into a bitcoin ATM in exchange for the digital currency. "I just sell bitcoin to others, because they don't know how to do it, so I take advantage of that and I make a profit," he said. - REUTERS