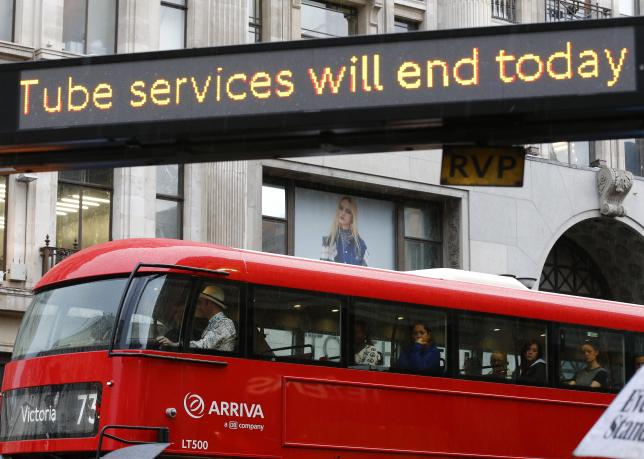 LONDON - Millions of Londoners struggled to work on Thursday as a strike by underground rail staff brought the network to a standstill for the second time in a month over plans for a new night-time service. Travel chaos was feared across the British capital as commuters turned to cars, boats, bicycles and packed buses with the 24-hour walkout by rail unions meaning no trains were running on the network which handles some four million journeys a day. The action follows a long dispute over the planned introduction of some 24-hour services at weekends on the "Tube", as the world's oldest underground passenger railway is known, which are due to be launched on Sept. 12. "Unions should accept very fair offer that's on table from London Underground and spare Londoners from pointless strike action," London mayor Boris Johnson said on his Twitter website. Transport for London (TfL) said it was laying on an extra 250 buses to help commuters get about the city, but a similar strike last month led to massive queues at bus stops and taxi ranks. Nick Brown, the managing director of London Underground, said their offer to unions included an above-inflation 2 percent pay rise, a one-off payment of 500 pounds and a promise that drivers would have the same number of weekends off. The annual leave would remain the same - 43 days for a train driver and 52 days for station staff. "We listened to their concerns over work-life balance and put forward an extremely fair, revised offer," Brown said. All four unions taking part in the strike said they supported night services but said the plans would destroy their members' work/life balance. "The Night Tube plan has been botched from the off," RMT General Secretary Mick Cash said. "The basics haven’t been done and those who will pay for this shambles will not only be our members but the London daily travelling public who cough up a fortune and who will find their safety and the reliability of the service compromised from Sept. 12 onwards." -Reuters