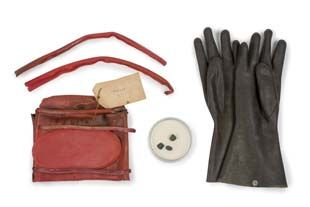 LONDON - Visitors to Britain's capital with a penchant for the macabre will have something new to investigate when the Metropolitan Police displays objects from some of its most notorious crimes at the Museum of London. Items on show include gloves used by serial killer John George Haigh, dubbed the "acid bath murderer" for dissolving his victims' bodies in sulphuric acid, as well as masks worn by the Stratton brothers. Alfred and Albert Stratton were the first people in Britain to be convicted of murder using fingerprint evidence. They were executed in 1905 and the exhibition also features a selection of ropes used for hangings. "Challenging and disturbing; familiar and unsettling, 'The Crime Museum Uncovered' will use select objects from this extraordinary, hidden collection to consider the changing nature of crime and advances in detection over the last 140 years," said Sharon Ament, director of the Museum of London. Some of the more mundane objects on display are the personal possessions of Ronnie Biggs, who took part in the 1963 Great Train Robbery, old drink cans used to smuggle drugs and a talcum powder tin designed to conceal microfilm by a Russian spy ring. Showcasing objects previously only accessible to police professionals and invited guests, the six-month exhibition where tickets cost 12.5 pounds ($19) online, also tracks the evolution of forensic methods used by police to solve crimes. "The public will view exhibits from some of the most complex and indeed notorious criminal investigations carried out by the Met, and discover how such crimes were solved," said Bernard Hogan-Howe, London's chief constable and Britain's top police officer. - Reuters