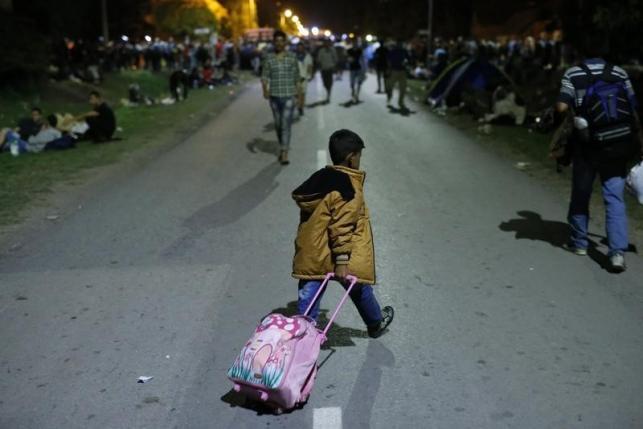 SID - Croatia has closed seven of eight road border crossings with Serbia after complaining of being overwhelmed by an influx of more than 11,000 migrants who evaded police, trekked through fields and tried to sneak into Slovenia by train in a march westwards that is dividing Europe. Only the main Bajakovo crossing, on the highway between Belgrade and Zagreb, appeared to be open to traffic on Friday, while neighbouring Slovenia stopped all rail traffic on the main line from Croatia after halting a train carrying migrants on the Slovenian side of the border. Migrants have been streaming into European Union member Croatia for two days, their path into the bloc via Hungary blocked by a metal fence, the threat of imprisonment and riot police who fired teargas and water cannon on Wednesday to drive back stone-throwing men. There were desperate scenes at a railway station on Croatia’s eastern frontier with Serbia, where thousands were left stranded overnight under open skies. The European Union has called an emergency summit next week to overcome disarray in the 28-nation bloc. Croatian Interior Minister Ranko Ostojic warned on Thursday that Croatia would close its border with Serbia if the flow of migrants continued at the same rate, saying his country was full to capacity. The president of Croatia told the military to be ready to join the effort to stop thousands of people criss-crossing the Western Balkans in their quest for sanctuary in the wealthy bloc. Late on Thursday, police announced they had banned all traffic at seven border crossings. “The measure is valid until further notice,” police said in a statement. Serbia's main highway north into Hungary is already closed by Hungarian riot police on the border. It remained unclear whether or how police would stop migrants, many of them refugees from Syria, from streaming through fields across the border away from official crossings, though their path across much of the frontier is made more difficult by the Danube river. DESPERATE SCENES Serbia warned its neighbours against shutting down the main arteries between them. "We want to warn Croatia and every other country that it is unacceptable to close international roads and that we will seek to protect our economic and every other interest before international courts," Aleksandar Vulin, Serbia's minister in charge of migration, told the Tanjug state news agency. Authorities shuttled some of the migrants to reception centres near Zagreb, but many broke away or simply slipped the net of overwhelmed police and set off for the Slovenian border, just 30 km (18 miles) from the Croatian capital. There, Slovenian police halted a train carrying some 150 migrants at Dobova train station on Slovenia’s side of the border and said they would be sent back. A Reuters TV crew said some tried to leave the train but were stopped by police. Some refused water in protest. Slovenian authorities eventually decided to escort the migrants to a refugee centre in Postojna. Slovenia said police had stepped up checks in the area with helicopter and land patrols. Hungary’s crackdown has shifted pressure onto Croatia, Slovenia and Romania. At the eastern border town of Tovarnik, scuffles broke out as Croatian police tried to get women and children to board buses to reception centres near Zagreb. Women screamed and children cried. An Iraqi from Baghdad who gave his name as Riad said he had been separated from his wife and child. "Only women and children are now allowed onto buses. My wife and child are gone and they (police) do not allow me to join them. My phone does not work." Groups of migrants broke away from police and set off on foot down railway lines and through fields. "They want to take us to the camps, but we don't want that," said one man as he set off, without giving his name. -Reuters