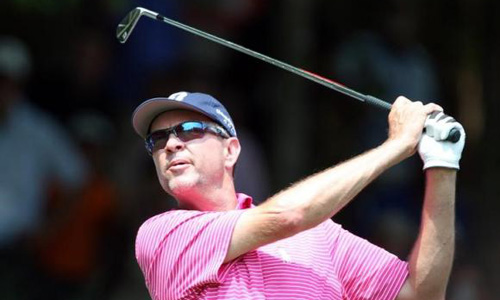 FLORIDA (Reuters) - Former PGA Championship winner Davis Love III will captain the United States in the 2016 Ryder Cup match against holders Europe at Hazeltine in Minnesota, the PGA of America said on Tuesday. It will be the second time Love, 50, has led the team in the biennial event as he guided the US team to a 10-6 lead heading into the final day in 2012 but lost by 14-1/2 points to 13-1/2 in what is known to European fans as the "Miracle of Medinah." "I am here with the same goal as in 2012 but not as the same captain," Love said during his introductory news conference. "It's a new business model, a new team building model, that comes from being given an opportunity by the PGA of America to come together and use all our veteran experience to build a new team culture and a consistent plan for the future. "Simply, we want to win. What we have created is a new process for continuity and team work which will prepare us for many years of success." Tom Lehman, who was a member of three Ryder Cup teams and captain in 2006, was also introduced as a vice-captain. Love, who won his sole major at the 1997 PGA Championship, played in six consecutive Ryder Cups from 1993. He tasted victory on his first appearance and in 1999. Europe have won eight of the last 10 Ryder Cups. Last year's loss to Europe at Gleneagles was followed by five-times major winner Phil Mickelson's scathing of the approach used by American captain Tom Watson. But Mickelson, part of the task force that selected Love, was enthusiastic about the new appointment. "He was a perfect fit for what we wanted in that we have input coming from all different areas and he's a great guy to integrate all that information. "He's a guy that people love and respect, and he's a guy that already has done a great job and put us in a position to succeed, even though we didn't do it," he said. The PGA of America also unveiled a set system for the four vice captains as two will be past Ryder Cup captains and two will be players with extensive Ryder Cup history. Another change will see a revised points qualification system and new timing for the captain's wild-card picks, which will be pushed back by two weeks.