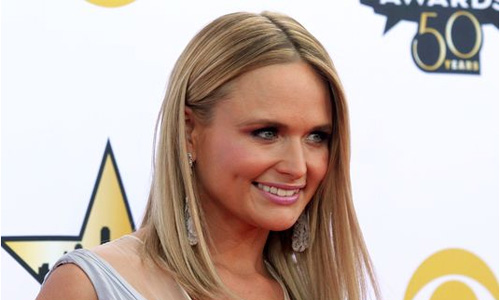 ARLINGTON, TEXAS – Luke Bryan won the fan-voted top prize of entertainer of the year at the 50th Academy of Country Music Awards on Sunday, which drew more than 70,000 fans to theAT&T Stadium in Arlington, Texas. The home of the Dallas Cowboys was at near-capacity and broke the Guinness Book of World Records for most attendance at a live awards show - logging 70,252 guests. Bryan and fellow country music star Blake Shelton hosted the awards, broadcast on CBS, for the third year running. "They say everything is bigger in Texas," Bryan told the crowd. "Tonight we are the most attended live award show of all time.” Miranda Lambert, who led all nominees for the second consecutive year with eight nods, walked away with three awards, including Album of the Year for her work, “Platinum." "It’s good to be home,” said Lambert, a native Texan. Jason Aldean took home the award for male vocalist of the year for the third straight year. Cole Swindell won the fan-voted new artist of the year. George Strait, who retired from touring with a final show at Cowboys’ Stadium last year, debuted his new single, “Let it Go” after performing a medley of his greatest hits. Little Big Town, whose latest single "Girl Crush," has drummed up controversy over how it depicts post-breakup jealousy, won for vocal group of the year. "We really wanted to bring big hair back to country music," said singer Karen Fairchild. Garth Brooks, Kenny Chesney, Miranda Lambert, Reba, George Strait, Taylor Swift, and Brooks & Dunn each received a 50th Anniversary Milestone Award. Swift, who crossed over from country to pop music, thanked the academy and fans for sticking by her. “When I told you I wanted to make a pop album, you showed me who you are with the grace you accepted it with,” she said. Alan Jackson performed his Grammy-winning hit "Where Were You (When the World Stopped Turning)", a song he wrote in honor of the 20th anniversary of the Oklahoma City bombing. Garth Brooks dedicated his patriotic performance of “All-American Kid” to U.S. troops while audience members held up plastic cards forming the American flag. The Academy of Country Music honors big stars as well as small market radio disc jockeys and concert promoters, and the awards are voted on by members of the Encino, California-based professional organization. –Reuters