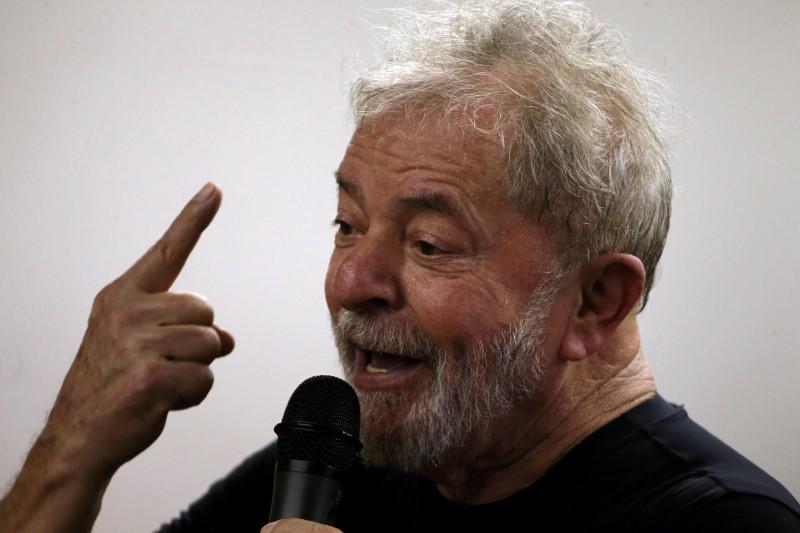 BRASILIA, Brazil (Reuters) - Jailed former president Luiz Inacio Lula da Silva’s Workers Party has reached a neutrality pact with the Brazilian Socialist Party (PSB) that will end their rivalries in several states in Brazil’s general election in October.
The Workers Party announced the move in a statement on Wednesday night, while the PSB must still ratify at its convention on Sunday a commitment not to back any presidential candidate since it is not fielding its own. The pact is a blow to centre-left presidential candidate Ciro Gomes, who is running third in early polling and sought the backing of the PSB to boost his chances of making the run-off between the two candidates with the most votes on October 7. It also confirms that Brazil’s left will enter the election divided, which could help the business-friendly centre-right candidate Geraldo Alckmin and far-right hopeful Jair Bolsonaro, who is currently the front-runner riding on voter anger with political corruption and rising crime. Gomes lashed out at Lula for not backing him as a new alternative for Brazil’s progressive forces and for insisting on being a candidate even though the former president is in prison. “The Workers Party is taking us to the brink of a precipice,” he said in an interview with Globo News cable TV channel. In a bid to gain his support, Gomes recently said his election was Lula’s best chance to get out of jail. In Brazil’s most uncertain race in decades, the Workers Party plans to nominate Lula at its convention on Saturday, even though he cannot campaign and will almost certainly be barred from running due to a corruption conviction. Lula, who is still Brazil’s most influential politician, is expected to name a stand-in at the last minute in mid-September. The Workers Party will withdraw Marilia Arraes, its candidate for governor who was threatening the re-election of Paulo Camara in the PSB’s most important state, Pernambuco. In return, the PSB will not run against the Workers Party governor of Minas Gerais, Fernando Pimentel, party officials told Reuters.