Macron made last-minute bid to get Trump, Rouhani to talk in New York 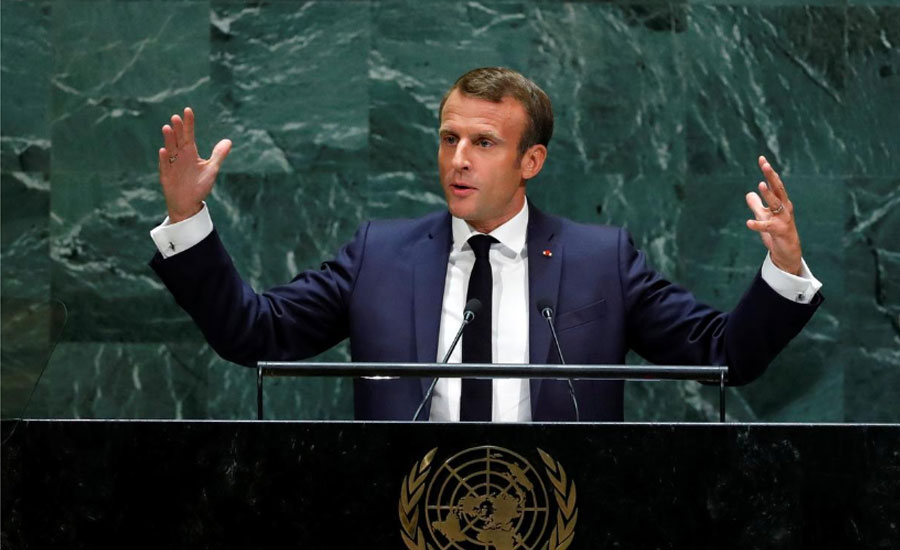 Macron made last-minute bid to get Trump, Rouhani to talk in New York

PARIS/WASHINGTON/UNITED NATIONS (Reuters) - Before leaving New York last week, French President Emmanuel Macron made a failed last-minute push to get US President Donald Trump and Iranian President Hassan Rouhani to speak on the sidelines of the annual UN gathering of world leaders, according to several sources familiar with the situation.
Macron had been trying over the past few weeks to defuse tensions between Washington and Tehran, which spiked after a September 14 attack on Saudi oil facilities that Saudi Arabia, the United States and Europe blamed on Iran. Tehran has denied involvement. The French president went to a Midtown Manhattan pizza restaurant last Tuesday night for dinner - before he was due to head to New York’s John F Kennedy airport - and a French diplomatic source said it was there that he “decided to give things one more try: get the two sides to talk on the phone.” It would be a final push to cap Macron’s two days of shuttle diplomacy in New York between Trump and Rouhani. Macron, who has been trying to salvage the Iran nuclear deal despite Washington’s withdrawal, had told reporters just before dinner that he believed conditions were in place for Trump and Rouhani to talk. Sources familiar with the situation, speaking on condition of anonymity, said Trump agreed to a phone call. Trump had planned to reiterate, however, that he would not lift sanctions on Iran, one source said. A message was sent to Rouhani that Macron wanted to see him, the sources said, but when Rouhani was told that there had been no agreement by Washington to lift sanctions, Rouhani declined to meet Macron. The sanctions have crippled Iran’s economy and cut off its oil exports. The French president showed up anyway at Rouhani’s hotel opposite U.N. headquarters, the sources said, and a secure phone line was set up in one of the rooms on Rouhani’s floor. “If the Iranians hadn’t wanted the call, they wouldn’t have let us install the secure line,” said the French diplomatic source, adding that Macron did not see Rouhani at the hotel that night “because Rouhani didn’t take the call.” Instead Macron spoke to Trump on the secure phone line, the source said, “to say thank you for being available.” Macron’s attempt to broker a phone call between Trump and Rouhani was first reported by the New Yorker. Before the attacks on the Saudi oil facilities, France had proposed offering Iran about $15 billion in credit lines until year-end if Tehran came fully back into compliance with its 2015 nuclear deal. That would have depended on Washington easing some sanctions. Iran has repeatedly said it will not talk to the United States unless Washington lifts sanctions on the country and returns to the deal that curbed Tehran’s nuclear program in exchange for the removal of UN, US and European sanctions. Trump quit the nuclear deal last year - negotiated under his predecessor, Barack Obama - and reimposed sanctions, demanding Tehran negotiate a broader pact that halts its ballistic missile work and end its support for proxy forces in the Middle East. Obama and Rouhani spoke by telephone in 2013, the highest-level contact between the two countries in three decades. Before Macron’s last-minute attempt to broker a phone call between Trump and Rouhani, Trump had told the U.N. General Assembly: “No responsible government should subsidize Iran’s bloodlust. As long as Iran’s menacing behavior continues, sanctions will not be lifted; they will be tightened.” On Wednesday, Rouhani addressed the 193-member world body. In a veiled swipe at Trump’s three public meetings with North Korean leader Kim Jong Un amid much fanfare, Rouhani said such photo opportunities should be the last stop in a negotiation, not the first. He said: “Our response to talks under pressure is NO.” Iranian authorities have said Tehran rejected eight US requests for a meeting between Trump and Rouhani on the sidelines of the UN General Assembly meeting in September 2017. At the United Nations last year, Trump posted on Twitter that “despite requests,” he had no plans to meet Rouhani, adding: “Maybe someday in the future.”