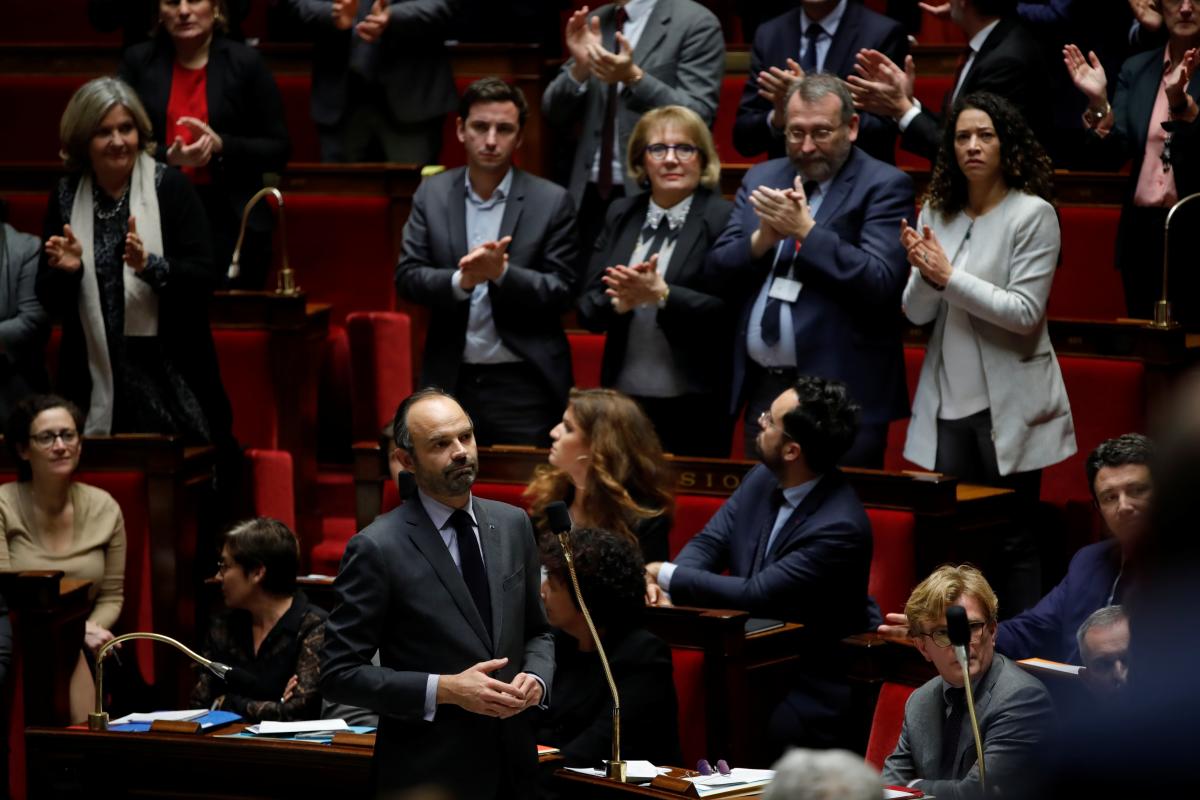 PARIS (Reuters) - France’s prime minister on Tuesday suspended planned increases to fuel taxes for at least six months in response to weeks of sometimes violent protests, the first major U-turn by President Emmanuel Macron’s administration in 18 months in office. In announcing the decision, Prime Minister Edouard Philippe said anyone would have “to be deaf or blind” not to see or hear the roiling anger on the streets over a policy that Macron has defended as critical to combating climate change. “The French who have donned yellow vests want taxes to drop, and work to pay. That’s also what we want. If I didn’t manage to explain it, if the ruling majority didn’t manage to convince the French, then something must change,” said Philippe. “No tax is worth jeopardising the unity of the nation.” Along with the delay to the tax increases that were set for January, Philippe said the time would be used to discuss other measures to help the working poor and squeezed middle-class who rely on vehicles to get to work and go shopping. Earlier officials had hinted at a possible increase to the minimum wage, but Philippe made no such commitment. He warned citizens, however, that they could not expect better public services and lower taxes. “If the events of recent days have shown us one thing, it’s that the French want neither an increase in taxes or new taxes. If the tax-take falls then spending must fall, because we don’t want to pass our debts on to our children. And those debts are already sizeable,” he said. The measures will cost around 2 billion euros (£1.7 billion), but will be offset by corresponding spending cuts, a government source said. The so-called “yellow vest” movement, which started on Nov. 17 as a social-media protest group named for the high-visibility jackets all motorists in France carry in their cars, began with the aim of highlighting the squeeze on household spending brought about by Macron’s taxes on fuel. However, over the past three weeks the movement has evolved into a wider, broadbrush anti-Macron uprising, with many criticising the president for pursuing policies they say favour the rich and do nothing to help the poor. Despite having no leader and sometimes unclear goals, the movement has drawn people of all ages and backgrounds and tapped into a growing malaise over Macron’s leadership. Over the past two days, ambulance drivers and students have joined in and launched their own protests. Two unions, CGT and FO, called lorry drivers to start a strike from December 9 while several Facebook pages were also urging new rounds of demonstrations for next Saturday. After three weeks of rising frustration, there was scant indication Philippe’s measures would placate the “yellow vests”, who themselves are struggling to find a unified position. “The French don’t want crumbs, they want a baguette,” ‘yellow vest’ spokesman Benjamin Cauchy told BFM, adding that the movement wanted a cancellation of the taxes. Another one, Christophe Chalencon, was more blunt: “We’re being taken for idiots,” he told Reuters, using a stronger expletive.

The timing of the tax U-turn is uncomfortable for Macron. It comes as governments meet in Poland to try to agree measures to avert the most damaging consequences of global warming, an issue Macron has made a central part of his agenda. His carbon taxes were designed to address the issue. But the scale of the protests against his policies made it almost impossible to plough ahead. While the “yellow vest” movement was mostly peaceful to begin with, the past two weekends have seen outpourings of violence and rioting in Paris, with extreme far-right and far-left factions joining the demos. On Saturday, the Arc de Triomphe national monument was defaced and avenues off the Champs Elysees were damaged. Cars, buildings and some cafes were torched. The unrest is estimated to have cost the economy millions, with large-scale disruption to retailers, wholesalers, the restaurant and hotel trades. In some areas, manufacturing has been hit in the run up to Christmas.

Macron, a 40-year-old former investment banker and economy minister, came to office in mid-2017 promising to overhaul the economy, revitalise growth and draw foreign investment by making the nation a more attractive place to do business. In the process he earned the tag “president of the rich” for seeming to do more to court big business and ease the tax burden on the wealthy. Discontent has steadily risen among blue-collar workers and others who feel he represents an urban “elite”. For Macron, who is sharply down in the polls and struggling to regain the initiative, a further risk is how opposition parties leverage the anger and the decision to shift course. Ahead of European Parliament elections next May, support for the far-right under Marine Le Pen and the far-left of Jean-Luc Melenchon has been rising. Macron has cast those elections as a battle between his “progressive” ideas and what he sees as their promotion of nationalist or anti-EU agendas. Le Pen was quick to point out that the six-month postponement of the fuel-tax increases took the decision beyond the European elections.