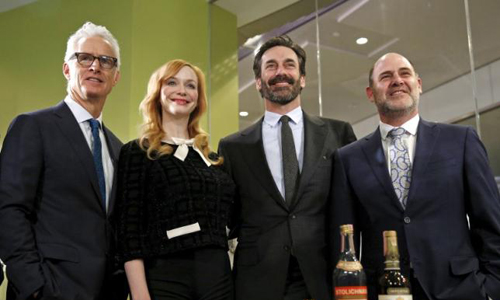 NEW YORK - Don Draper's gray business suit and trademark fedora have found a home in the Smithsonian Museum of American History, and the Sixties are drawing to a close. It's the end of an era for "Mad Men," the slow-burning, Emmy award-winning TV series. The AMC cable network show became a pop culture phenomenon and inspired a revival of the fashion and decor of a tumultuous decade. Eight years after it arrived on U.S. television, the tale of troubled advertising genius Draper and the men and women around him draws to a close on April 5 with Part 2 of the seventh and final season. The show's creator Matthew Weiner says the season's title, "The End of an Era," is designed to entice, in more ways than one. "I was interested by the irony that the period is ending in the show, and the period is ending that the show was on," Weiner told Reuters. "With all the clichés about the turbulent Sixties and all the changes that went on, part of the message of the show was that the characters' lives are very similar to what yours are. They have the same problems, no matter what is going on historically," he said. And there are problems aplenty for twice-married Draper (Jon Hamm), his mousy one-time secretary turned executive Peggy Olson (Elisabeth Moss) and sassy divorcee Joan Harris (Christina Hendricks). IS THAT ALL THERE IS? Back on top, and fabulously wealthy after selling the ad agency to a rival when the first half of the split seventh season ended in May 2014, Draper and friends seem no happier with their lot. "The tone is dark, but maybe it seems familiar. I think the difference is that everyone's older and that lessons should have been learned and it seems as though they might not be. I think that will have consequences," Hamm told Reuters. "There are two ways to go. Up or down, and we'll see," he added obliquely. Known for the unusual secrecy surrounding its plots, no-one involved in the show is giving away how the series ends. That has not stopped fans from speculating on scenarios ranging from Draper's death to a blissful Don and Peggy romance. One trailer released by AMC suggests that the characters move into the mid-1970s. Unlike some TV writers, Weiner had not mapped out a specific ending when he first came up with the concept of "Mad Men." "When I was trying to sell the show, I had an idea that it could end in a certain way. But how it happened? That happened three or four years ago. It was like an aha moment," he said. Weiner hopes the core TV audience of 5 million or so viewers will be happy, but Hamm says you can never please everyone. "There needs to be one person who really likes the ending, and that's the guy that writes it...Matt was given the ability to end it the way he wanted to. I hope people like it. I don't want to be part of something that people hate, but I don't think anything is 100 percent either way," Hamm said. - REUTERS